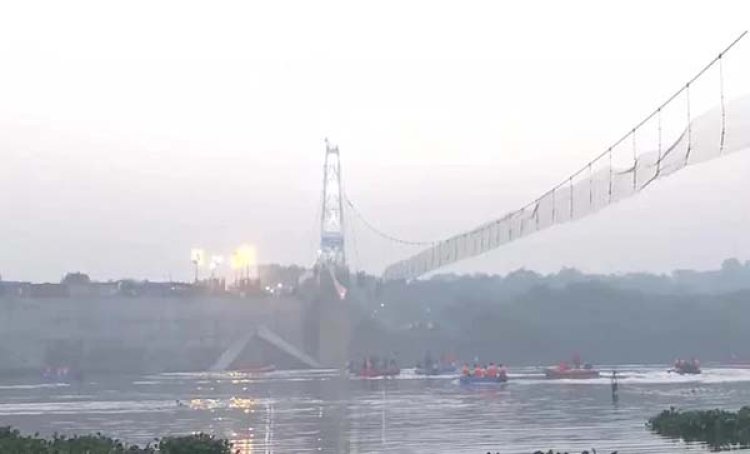 Since the tragedy of “jhoolta pul” collapse in Morbi, Gujarat, there are a million unanswered questions in the mind of people. From news anchors to opposition parties, everyone has something to say about the bridge collapse. Some say it was an “act of God,” some claim it was man-made, and some even believe the people who died were responsible for their death. An estimate of around 200 lives, which includes around 50 children and 50 women, were lost either due to drowning in the Machchhu River or falling on rocks of the seashore. This is the time of mourning for people who lost as many as 7-9 members of the same family—the time to process and come to terms with the fact how an outing with their loved ones turned into one of the worst catastrophes of the nation this year.

The beavered families must be going through despair, anguish, and hopelessness of accepting the reality, and in return, what they are exposed to is the insensitive reporting and remarks of someone who did not know the deceased personally. Watching the reporting on the incident on national television where people sit comfortably in AC sipping their coffee to “debate” and identify the culprit is the last thing they would want to know, and more so when the people who lost their lives are blamed for it. How is this fair? All humans deserve respect and dignity in their lives and also in their death. Playing the blurred video of people falling and desperately crying for help over and over helps no one.

The next step of the concerned authority should focus on preventing any such tragedy to happen and holding accountable those who are at fault and not the ticket seller and security guards. They are mere scapegoats while the criminals roam free. Built around 1900, the bridge was recently renovated and opened for public visits just four days back. The collapse involved a series of slipups from granting the renovation work to be done by a watchmaking company, Oreva, which had no prior similar experience, to the concerned people who gave a green signal for opening the bridge for the public and the authority who rushed the whole process.

The incident should be separated from politics completely so that it is taken care of without any prejudice and greed of political leaders whose aim is always to get an advantage out of any circumstances. Let’s hope the five-member committee formed by the Gujarat government find the culprit or rather culprits with honesty and integrity instead of covering up the incident. The question of whether this was an “act of God” or an “act of corruption” should not overshadow the main issue. The focus should be on preventive measures to be undertaken to avert such tragedies to occur in future. The committee should also evaluate the condition of similar infrastructures so that prompt action is taken beforehand. Every action taken in this matter should be people-driven and not politically motivated. The sheer act of people helping each other at the time of rescue without giving a single thought about the victim’s caste, religion, class, and gender represents the true picture of India; these people deserve to be rewarded for their courage and heroism.

Around 200 precious lives were lost; in such a bleak time, the media, political parties, and civil society should respect the affected families’ privacy and raise their voices to get these people the justice they deserve. At this moment, every citizen has a responsibility to ask the right question and be respectful towards the departed and their grieving families. This is the least expected out of humanity. Though the collapse of the bridge is irreversible and the damage caused by it is irreparable, we can still learn from this to never repeat the mistakes committed here.