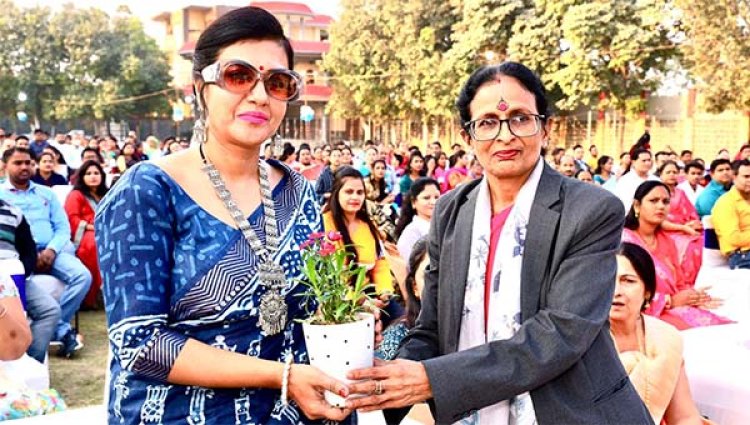 Vishal International School celebrated its 16th Annual Day function-themed "Jeevan ki Seekh" with a display of immense talent in order to glorify the years of academic excellence and existence of this institution which is setting standards across the globe. November 19th was a much-awaited day when the students, staff, and parents were filled with zeal to witness the extraordinary endeavors of the students, who worked enthusiastically for this occasion. The program took place on the school premises itself.

The magnificence of the day was made stronger by the Chief Guest, Dr. Meenakshi Sawhney, member of UNGC & Founder of L.A. Global Foundation, and Guest of Honour, Mr. Praveen Teotia, Ex-marine commando.

The program began with the rendition of the welcome, which was followed by the lighting of the lamp as the commencement of the Annual Day celebration. The guests were honored by the respected Principal of the school. It was followed by the Chief Guest and Guests of Honour's speech.

Speaking on the Occasion, Chief Guest Dr. Meenakshi Sawhney encouraged every single student to follow the dream and always keep the world ahead of anything else. She stated how L.A. Global Foundation is constantly working towards the holistic development of the people across Health, Education, Water, Sanitation & Economic Development by creating a scalable, replicable & community-centric model of sustainable development in accordance with the United Nation's 17 Sustainable development goals. She expressed her heartfelt gratitude to all who apprised the house of the school's unflinching efforts to cater to the holistic development of a child's personality.

The fiesta was marked by a series of exotic talents, thus creating a festive mood. At first, it started with Jeevan Ki Seek, where all the classes highlighted the different prospects of life that need to be followed, right from saying no to junk food to the importance of Unity. It was followed by Topper Prize Distribution, Sports Prize Distribution, Teacher's Prize Distribution, Mime Act, and last by sensation dance performances.

Guest of Honour, Mr. Praveen Teotia, was then invited to the dais to address the gathering. He was exhilarated to see the beautiful blend of the various art forms. The program then culminated with the Vote of thanks.