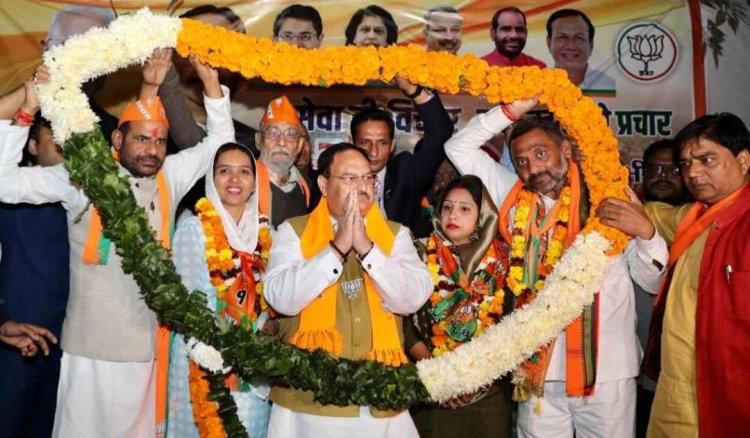 Along with him 13 other senior BJP leaders, held mega road shows in different areas of Delhi and appealed to the public about the importance of voting for BJP. They appealed to The people of Delhi to vote in favour in the upcoming MCD elections. People gave an unprecedented response to this Vijay Sankalp Road show. Huge crowds gathered in the roadshows and welcomed the leaders by raising slogans of Modi-Modi. The trend towards BJP was clearly visible on the faces of the people all around.

Shri J P Nadda said that today we have blown the conch shell in Delhi on the basis of the love and support of the people. Like people across the country, today Delhiites are also looking towards Prime Minister Shri Narendra Modi for development and progress.

Union Defence Minister Shri Rajnath Singh's Vijay Sankalp Road show started from Rama Park Uttam Nagar and he campaigned in Uttam Nagar and Vikaspuri assemblies civic wards. MP Shri Pravesh Sahib Singh, District President Shri Ramesh Saukhanda and corporation election candidates and thousands of party workers participated in the road show. The enthusiasm of the people of the rural areas of Delhi was visible in the road show and at many places the village heads and senior citizens of the colonies accorded a grand welcome to Shri Rajnath Singh by offering him turbans and showering flowers. Shri Rajnath Singh expressed confidence that the people of Delhi will once again give BJP an opportunity to serve in the Municipal Corporation elections to bring about all-round development seen in the country in Delhi as well.

The Vijay Sankalp Road show of State BJP President Shri Adesh Gupta started from Fatehpuri and concluded till Pahadi Dhiraj. MCD election Committee head Shri Ashish Sood, District President Sardar Kuldeep Singh and corporation election candidates and thousands of party workers participated in the road show. In this mega roadshow of BJP, Shri Adesh Gupta said that the people of Delhi are fed up with the rampant corruption of Arvind Kejriwal government and have themselves seen how BJP led MCD has worked for the people despite the economic crisis created by Kejriwal government, Services of primary education, health and sanitation have been provided despite financial constrains. The people of Delhi have full faith in the BJP and once again the people will elect the BJP in the Municipal Corporation election.l

Union Minister Shri Gajendra Singh Shekhawat's Vijay Sankalp Road show took place in different wards of Mehrauli Assembly. District President Shri Naresh Vashishtha and corporation election candidates and thousands of party workers participated in the road show. On this occasion, Shri Shekhawat said that I am the Jal Shakti minister of the country and my heart hurts when I see the condition of Yamuna in Delhi. He said that when the Yamuna enters Delhi from Haryana, it is pure, but due to the Kejriwal government’s not stopping the drains from falling directly into the river, the Yamuna has become polluted as well as poisonous. The central government gave funds to the Kejriwal government for cleaning the Yamuna, but still the cleaning work has not been done. Whether it is the cleanliness of Yamuna or pollution, Delhiites are fed up with everything and now they will reject Aam Aadmi Party in the upcoming elections.

Union Minister Shri Hardeep Singh Puri's Vijay Sankalp roadshow took place in the corporation wards of Mangolpuri Vidhansabha. Starting from Jaipur Golden Hospital and ending at Avantika Chowk Market. District President Shri Bajrang Shukla, corporation election candidate and thousands of party workers participated in the road show. On this occasion, Shri Puri said that the BJP-ruled Municipal Corporation has done a lot of work to solve the problems of traders and residents of unauthorized colonies, while the central government has given many development projects to Delhi and now home has been given under the Jaha Jhuggi waha Makan Scheme at Kalkaji wining the faith of people. He expressed hope that The people of Delhi will again elect the BJP on the coming 4th December.

Shri Manohar Lal Khattar said that Arvind Kejriwal does politics in every matter, but he does not know how to govern. He said that Kejriwal’s party is also in the government in Punjab but from there he is not giving regular water from S.O.L. to Haryana, as a result many times Haryana faces problems in providing water to Delhi. Delhiites are facing the consequences of Kejriwal's Punjab government's misdeeds, whether it is in the matter of water or in the matter of stopping stubble burning. He said that the people of Delhi's Narela and surrounding areas have a direct relationship with the people of Haryana and the Kejriwal government has hurt the sentiments of the people from Narela to Kondli by delaying the expansion of the fourth phase of Metro.

On this occasion, Shri Thakur said that in the recently held elections in Himachal, Aam Aadmi Party contested all the seats, but the reactions of the people are showing that Aam Aadmi Party's account will not even be open in Himachal. He appealed to the people of Delhi to re-elect the BJP in the Municipal Corporation for the all-round development of Delhi.

On this occasion, Shri Pushkar Singh Dhami said that there are lakhs of Uttarakhand residents settled in Delhi who are also connected to their home state and have seen how development has taken place in Uttarakhand under the guidance of Prime Minister Shri Narendra Modi and the same pace of development can be seen in Delhi. To bring in the residents of Uttarakhand in this electionWill choose BJP only.

The Vijay Sankalp Road show of Union Minister of State Mrs. Meenakshi Lekhi concluded at Patel Nagar via Balraj Khanna Marg from Shadipur Chowk in Karol Bagh Vidhansabha. District President Rajesh Goyal, corporation election candidate and thousands of party workers participated in the road show. On this occasion Mrs. Meenakshi Lekhi said that Arvind Kejriwal showed many beautiful dreams to the people of Delhi to make Delhi like London and Paris but did not fulfill even one of those promises and made Delhi the capital of pollution. Delhiites will never trust such Arvind Kejriwal and will choose BJP only in the corporation elections.

Union Minister of State Shri Jitendra Singh's Vijay Sankalp roadshow started from Bhagat Singh College of Greater Kailash Vidhan Sabha and ended in Chirag Delhi. District President Mr. Prashant Sharma, corporation election candidate and thousands of party workers participated in the road show. On this occasion, Shri Jitendra Singh said that people from different states have settled in Delhi and they know how the BJP governments have brought development in their states, whereas in the country's capital they are facing problems due to the Kejriwal government. He expressed hope that people defeat AAP and elect BJP in MCD elections.

The Vijay Sankalp Road show of Uttar Pradesh BJP President Shri Bhupendra Chaudhary took place in different wards of Rohtash Nagar and Babarpur assembly. MLA Shri Jitendra Mahajan, District President Mr. Manoj Tyagi, corporation election candidates and thousands of party workers participated in the road show. Mr. Bhupendra Chowdhary said on this occasion that lakhs of laborers from Uttar Pradesh live in Delhi and while Delhi has given employment to all of them, the government of Chief Minister Yogi ji has connected the remote villages of Uttar Pradesh with development and the result is that today in Delhi also I am seeing a sparkle in people's eyes towards BJP.

Vijay Sankalp road show of BJP MP Shri Dinesh Lal Yadav 'Nirhua' took place in various wards of Rajouri Garden Vidhansabha, in which mainly district president Shri Sachin Bhasin along with corporation election candidates and thousands of party workers participated in the road show. Shri Dinesh Lal Yadav said that lakhs of people of Purvanchal live in Delhi and most of them have themselves seen how the Kejriwal government of Delhi left them destitute during Covid, forcing them to flee to their villages. At that time, whether in Delhi or in Purvanchal, the BJP workers had supported the laborers by risking their lives and now the Purvanchal residents settled in Delhi will give their full support to the BJP in the corporation elections.

BJP National Spokesperson Dr. Sambit Patra's Vijay Sankalp Roadshow was held in various wards of Laxmi Nagar Vidhan Sabha in which State General Secretary Mr. Harsh Malhotra, BJP MLA Shri OP Sharma, Shri Abhay Verma and Shri Anil Vajpayee, District President Mrs. Lata Gupta, Corporation Election Candidate and part Thousands of workers participated in the road show. Dr. Patra said that the Municipal Corporation election of Delhi is not an ordinary election, Delhi is the capital of the country, where on one hand Prime Minister Shri Narendra Modi's government has given many development projects and on the other hand, Kejriwal government has indulged in corruption deeds. Therefore, the people of Delhi have to decide whether they will choose development or the corrupt government.

Convener of Vijay Sankalp Roadshow program and State General Secretary Shri Kuljeet Singh Chahal said that in today's roadshow people showed special attraction towards BJP candidates in all areas, everywhere people welcomed the roadshow with slogans of Modi-Modi. It is clearly visible that the people of Delhi will again on December 4th choose BJP. He said that roadshows of senior leaders will be a major part of the election campaign in the party's continued campaign.