The DU professor had attributed the high marks which students from Kerala scored to a fictitious "marks jihad". This drew calls for action to be taken against him from students' bodies and politicians alike. 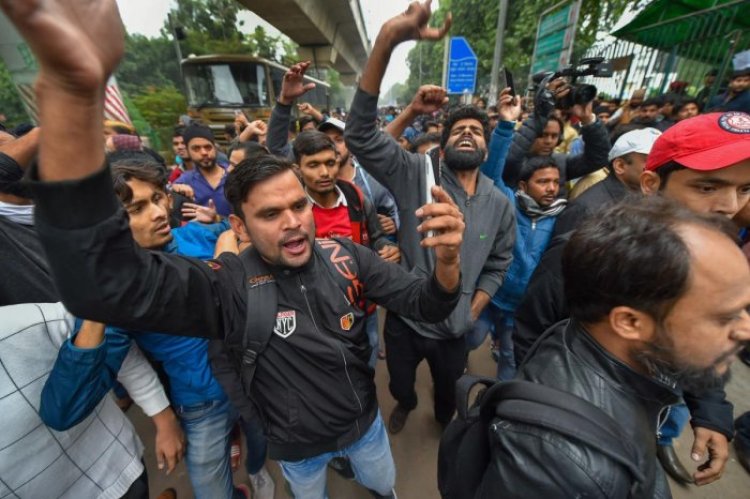 New Delhi: The National Democratic Teachers’ Front (NDTF), an RSS-affiliated teachers’ body on Friday, October 8, distanced itself from the “marks jihad” comment made by Rakesh Pandey, a physics teacher at Kirorimal College and former president of the body, the Indian Express reported.

In a Facebook post made on October 5, Pandey had said, “A college had to admit 26 students in a course having 20 seats only because they all had 100 percent marks from Kerala board. For last few years, Kerala board is implementing #MarksJihad.”

The addition of the “jihad” suffix to common nouns to indicate presence of fictitious conspiracies hatched by India’s Muslim population has gained ground among leaders and workers of the Bharatiya Janata Party and other Hindutva organisations. Recently, a Kerala bishop’s “narcotics jihad” comment was criticised widely and summarily refuted by the state’s chief minister, Pinarayi Vijayan. The bogey of “love jihad” – for which the Union home ministry has said there exists no data – has now been given legal credence by the BJP governments of Uttar Pradesh, Haryana, and Gujarat.

In his analysis for The Wire on the communal underpinning of India’s efforts to fight terrorism, N.C. Asthana has delved into the etymology of the word “jihad” itself and sought to establish how it is far removed from the use it is being put to today.

Following Pandey’s remarks, the NDTF issued a statement in which it said, “NDTF has nothing to do with views expressed by any individual on any State Secondary Board. NDTF unambiguously dissociates itself from any objectionable statement.”

In the same statement, the NDTF also noted that Delhi University (DU), being a central university, grants students from all states “equal rights” based on merit to study in the best institutions.

Pandey’s remarks were widely criticised by several students’ bodies, including the Students’ Federation of India (SFI), the All India Students’ Association (AISA) and the National Students’ Union of India (NSUI), all of which held protests on various DU campuses on Friday.

At the same time, the DU Students’ Union, led by the Akhil Bharatiya Vidyarthi Parishad (ABVP) stated that inflated board marking was causing disparity in admissions and burnt an effigy of the DU administration.

Calls for Pandey’s resignation came from many corners. Ritwik Raj, AISA secretary asked how a teacher could be trusted when he was “spewing venom” before even meeting the students he was attacking. Raj went on to note that AISA would “tolerate no compromise with the ideal of secularism in the university.”

The NSUI, led by state president Kunal Sehrawat met with the principal of Kirorimal College and gave him a memorandum calling for “strict action” to be taken against Pandey. Outside the college, they even burnt photographs of Pandey.

Senior congress leader Shashi Tharoor also condemned Pandey’s remarks. Taking to Twitter, Tharoor highlighted the disturbing trend in the country to cry “jihad” whenever a trend emerges that an individual doesn’t agree with.

Sivankutty, Kerala’s education minister, alleged that Pandey’s comments were part of a deliberate attempt to prevent students from Kerala from getting admission in DU and condemned the university’s silence on the matter, according to a report by the Hindustan Times.

Sunday Zodiac: How will fasting in the festive season turn out to be for each sign?