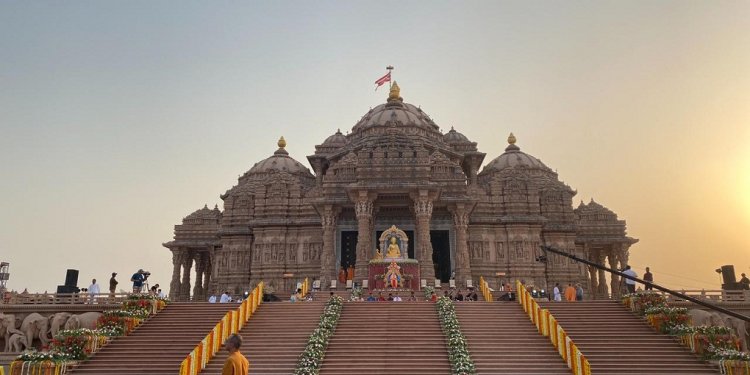 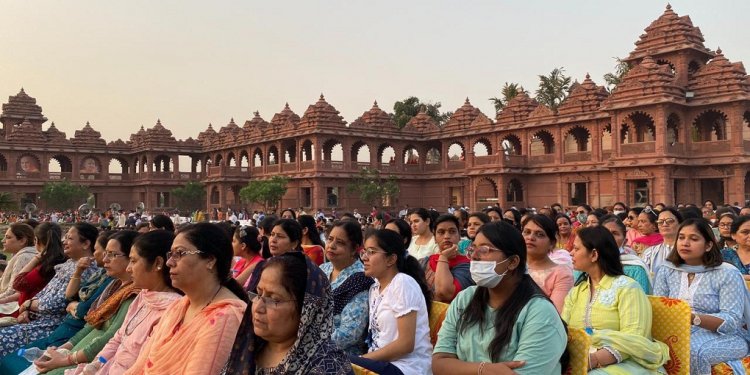 The evening began with an explicit narration of the life, work, creation of Akshardham, and services of HH Pramukh Swamiji Maharaj by Pujya Munivatsal Swamiji and Pujya Aksharvatsal Swamiji. The endorsing pictures appearing on the screen were heartily embraced by the audience. Their huge applause was a salute to this revered soul.

The august crowd was overwhelmed by listening to the real-life incidences from the visitors to this place, whose lives became extraordinarily blissful after being touched by the values enshrined at Swaminarayan Akshardham, New Delhi. Their strict adherence to the path shown by the depictions at this monument is incredible. Interestingly, these are the lesser-known people from different regions, professions, and faith but with the same objective of living a pious life beneficial and dedicated to mankind. This was the magical effect of this sacred place which was constructed by HH Pramukh Swamiji Maharaj for the welfare of the society.

It was ultimately the children who brought the most magnetic smile to the face of HH Pramukh Swamiji Maharaj. Today, this enthusiastic childhood of mankind landed on the stage to display its unshakeable faith and unending love for him. Their gestures and confidence were sufficient evidence that His Holiness has handed over the society to values-centric future humanity.

Pujya Atmaswarup Swamiji and Pujya Brahmavihari Swami projected the construction of Akshardham as an agent to change the lives of people for a better present and future. Theses were further extended by Pujya Bhadresh Swamiji who justified the role of Akshardham as an initiator and bridge for community dialogue towards bringing betterment of the human society. 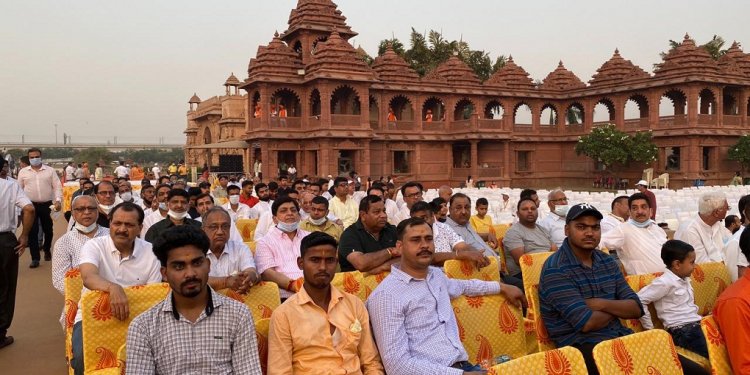 Towards the close of the ceremony, Pujya Anandswarup Swamiji and Ishwarcharan Swamiji spoke passionately about the egolessness of HH Pramukh Swamiji Maharaj, while highlighting his remarkable incidents oh his life. This left the eyes and ears of the listeners wide-opened and their hearts large-sized. All the presentations made the invitees spell-bound as they realized that in today’s world of cut-throat competition, here is an example of the ‘Head’ who has succeeded by allowing others to succeed. Their facial expressions were an affirmation that one can and should follow the humble principle followed by Pramukh Swamiji throughout his life i.e. “In the joy of others lies our own”.

The event was concluded with the inspiring words of the present Guru of BAPS Pujya Mahant Swamiji Maharaj’s ashirvad which touched the inner soul of the audience.

The energetic chanting of ‘Pramukh Swami Maharaj ki jai’ and the sacred words of the Aarti ceremony added sparkle to the picturesque illumination of the Akshardham. Thus, though the meeting of the divinity came to an end, this event wrote the beginning of a new avenue that intellectual achievements require a spiritual connotation as its silver lining.

Celebrations by the followers to mark the Foundation-day of Dera Saccha Sauda in...