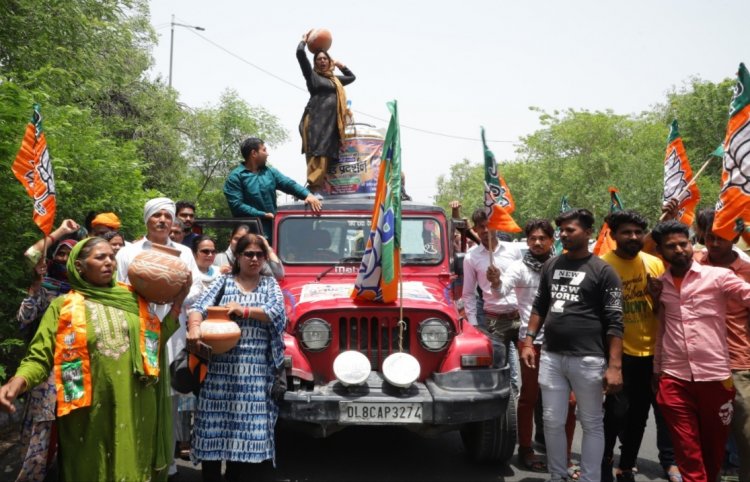 New Delhi, 1st June. The BJP national vice president and Delhi co in charge Shri Baijayant Jay Panda, said the way Delhiites are longing for a drop of water and there is acute shortage all around in the city, Arvind Kejriwal is unfazed and unable to tell Delhiites what happened to Rs 57000 crore given to Delhi jal board. Such is the situation of the board that forget giving round the clock water supply, it is not even able to give clean water. Along with state President Shri Adesh Gupta, LOP Shri Ramvir Singh Bidhuri, he was addressing a protest demonstration on water supply shortage organised by West Delhi MP Shri Parvesh Sahib Singh against Kejriwal government at Delhi secretariat here.

Shri Gupta said it is same Kejriwal who used to say about Sheila Dikshit government that when we come to power we would get rid of water tanker mafia but has now shaken hands with same people who are filling his ministers and MLAs pockets. Water pipe lines have been changed only on papers with no work visible on ground. He said CAG has written 22 times to Kejriwal asking for account of this money but to no avail. He said Delhi now needs 13000 MGD water but 30 per cent of the water supplied is wasted in leakage itself. In fact, FIR should be registered against him for making Delhiites drink contaminated, smelly and bad quality water, he demanded.

Shri Bidhuri said now Kejriwal has got Rs 75000 crore budget but Delhiites are still crying for water. He said CM has said repeatedly he would give pure water to Delhiites but fact is 44 per cent of aren’t getting pure drinking water. They are getting afflicted with water borne diseases. He said when water samples were tested 42 per cent6 of it failed. Not a single water treatment plant came up during last eight years and no steps were taken by Kejriwal to take care of water logging resulting into most areas getting submerged even with little and unseasonal rains.

Shri Parvesh Sahib Singh said till Delhiites get clean drinking water we won’t let Kejriwal enter west Delhi. He said the efforts of women from different areas carrying pitchers and participating in this protest will definitely fructify. He said such is the situation after drinking contaminated water people are not even getting treatment facilities. He said Kejriwal government refused to start jal jiwan mission scheme under which Andaman Nicobar is getting pure water. But so busy and drowned Kejriwal government is in corruption that it has made life difficult for people here, he charged. Those who took part in protest were media head Shri Naveen Kumar Jindal, former Mayor Shri Mukesh Suryan, SDMC Education Committee former Chairperson Nikita Sharma, District President Sachin Bhasin and Vijay Solanki among others.

Indian flag unfurled 30 kilometres above the planet by...