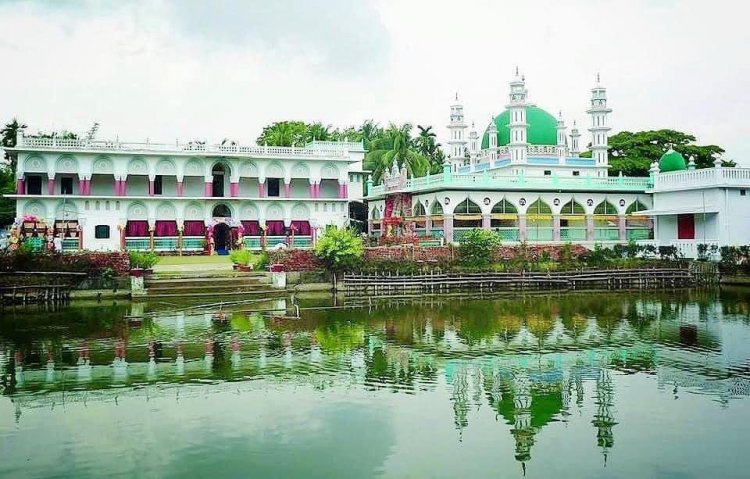 As a teenager, he left home and went to Calcutta, India for higher Islamic studies at Aliah Madrasah.  He had such sharp memory that he once said that after he went through a subject, he remembered it for 14 years.

He later earned the highest formal degree, “Mamtazul Muhaddithin” in 1259 A.H. (1843).  He was highly respected by both Muslims and Non-Muslims as “Bade Mawlana” (Big Scholar).

Hazrat Mawlana Mukhlisur Rahman Jahangiri (Qaddas Allahu Sirrahu) spent 30 years in hard and tireless spiritual exercise while keeping distance from the people. He did not sleep much, and would instantly respond when called by anyone while he was asleep.  He also famously traveled to Ajmer Sharif, India from Chittagong, Bangladesh which was a journey of 6 months.

He was known as the greatest scholar of his time due to his mastery in both Shari’ah (Islamic Law) and Tariqah (Spiritual Path).  He had such a high spiritual station that he received the message of his passing away three times, which is only reserved for the khas o khas (special of special) awliya (saints).

Hazrat Khwaja Mawlana Mohammad Khushhal Shah (Qaddas Allahu Sirrahu) was amazed at the love, manners, respect and aura of the Darbar.  He would tell his mureeds about how silence is religiously observed at Darbar Mirzakhil.  He spoke about how he stayed at Hindustani Hut and the great hospitality shown in the Khanqah for the visiting people.  He often spoke about how Hazrat Shah Jahangir (IV) Mawlana Areful Hai (Qaddas Allahu Sirrahu) resembled his forefathers along with his extreme humility and hospitality.

The same love is also shared between Hazrat Sufi Jawwad Ahmed Khushhali and Mohammad Masudur Rahman (Sarfaraz Mia) who coordinates with all the Jahangiri branches and is engaged in great charity work.