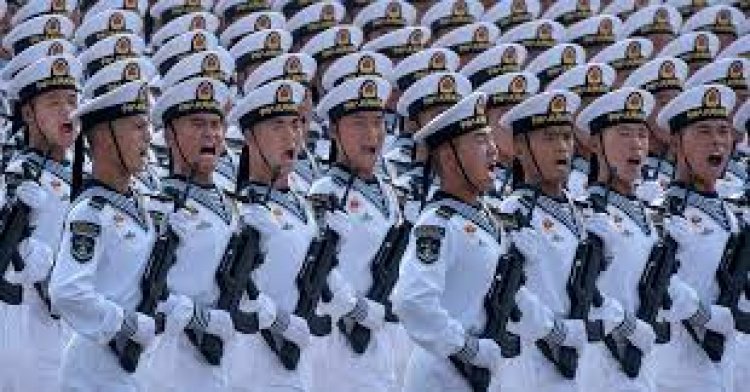 China’s communist leaders had created a massive maritime force, using funds and technologies appropriated from an unsuspecting western hemisphere, which could allow them to impose their will on the world.

But the Seas aren’t easy to control, as Beijing seems to be finding out now.

Last month - the naval, air and conventional forces of People’s Liberation Army’s (PLA) Eastern Theatre command held drills in seas and airspace to the East and South-West of Taiwan, without warning. These were not ordinary drills either. They were live-fire drills with carrier-based fighters and helicopters!

Such incidents of intrusion, illegal occupation and illicit conduct of exercises have marred the legacy of PLAN……or rather of this ‘new and reinvented’ PLAN. But what’s interesting is that, all such illegal activities by PLAN have been increasing exponentially in spite of Chinese President Xi Jinping and the Foreign Minister promising that China would not use its strength to bully smaller nations. Which begs the questions -  Who is brewing trouble in our neighbourhood?

The root of the problem seems to be Beijing’s stubbornness to impose archaic rules and conditions on the seas. By trying to claim seas and dominate international trade routes, Chinese Navy has faced allegations that it neither understands the conceptof free and open maritime commerce, nor respects the maritime right of other countries.

Xi Jinping’s repeated intrusions in the maritime boundary of South China Sea nations has created a tense atmosphere in the region. This has only worsened with the implementation of disputed policies that hinder freedom of navigation for all; and earned only hostility towards China and her forces. Seldom has a week gone by in recent times without reports of another Chinese ships (Navy or Coast Guard or Militia) engaging in disturbing and dangerous acts at sea. Be it fully militarising disputed islands in SCS or forcing intrusion into foreign EEZs; or planned adventures and attacks on foreign naval and merchant ships by China’s maritime militia; CCP’s forces have resorted to a series of unsafe, unprofessional and unethical tactics.

Researchers of the US Naval War College, Ryan D. Martinson and Conor M. Kennedy, redefined ‘Nadi lianbing’ or ‘using enemy to win troops’ as a special training form that exploits opportunities created by close encounters with the putative enemy.

This is not a new approach for China as it has been discussed often by various Chinese military men and defence analysts since 2014. But a recent report (in March 2022) by the Jamestown Foundation explains that with nadi lianbing the CCP Navy, Coast Guard and Militia will continue to act provocatively, even irrationally in foreseeable future. The grave implications of such immature attitude cannot be overstated.

An earlier report in March 2021, identified a new facet of the CCP Navy’s plans – to use maritime military manoeuvre to achieve control over vital maritime sea passages. When considered along-with the plan to ‘use the enemy to train’, this indicates that China’s maritime forces are now going to deliberately seek confrontations with other Navies/ security agencies in heavily trafficked waterways. In such situations, they are also likely to use dubious means, including those which are dangerous and unlawful, to provoke reactions which could help them to assert their influence.

The actions of China’s forces in the South and East China Seas (SCS and ECS) have repeatedly reflected wicked intentions. From ramming of Coast Guard vessels belonging to neighbouring countries and Chinese militia stalking foreign warships transiting SCS & ECS, to aggressive deployments in the vicinity of Taiwan and Japan; the CCP Navy has readily embraced the behaviour of a tyrant. Continuous use of provocative actions to assert Chinese dominance, coupled with the loss of international confidence in the CCP Navy’s maturity, has resulted in a highly volatile situation in the Indo-Pacific region.

"As we look at some of the aggressive behaviour that we have witnessed from China in the Indo-Pacific, I'm concerned about something that could happen that could spark a crisis"

Which is why, in spite of Chinese president and senior ministry officials’ repeated claims that China is committed to developing a relationship of non-conflict, non-confrontation, mutual respect and win-win cooperation with all nations, their actions in the maritime domain have become not just a cause of concern but also a serious headache for everyone.

Chinese forces’ repeated contempt of international laws, their disregard of basic maritime courtesies, and their blatantly aggressive behaviour has left nations wondering - is PLA’s ‘bullish attitude’ a result of a young navy trying to learn from its mistakes, or is it a deliberate attempt with a well-defined objective – an inevitable war in our neighbourhood?

How to Revive the spirit of Quit India Movement?