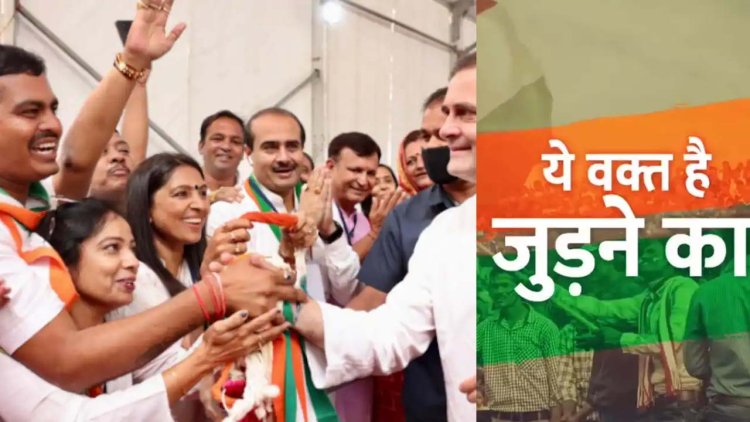 The humongous success of Bharat Jodo Yatra has brought forth many a dormant issues of Indian society and politics to the fore. While its title does hint to combat social divisions created along religious lines during last three decades, core issues of Indian society have come to fore. The problems of farmers, youth, rising prices, the worsening plight of Adivasis, the insecurity and other problems of women are being well articulated during this spectacle. This is visible not only in the statements of its leaders of Yatra but also through those who are joining the Yatra with great enthusiasm and hope.

Indian society witnessed the divisive issues, emotive issues and the escalating religious violence along with decline in the conditions of the average, poor and marginalized sections of society. While mainstream media, the so called Godi media, is mostly ignoring this great phenomenon, mercifully sections of social media, small channels, you tubers have done a remarkable job in highlighting the churning in Indian society. This phenomenon is changing the ecosystem of our society. To large number of people a sense of despondency is giving way to some sense of hope and optimism.

At electoral level the BJP has already made unshakable place in Indian political system. Apart from the rightward shift towards Hindu nationalism engineered by RSS combine, BJP enhanced its political clout by winning over opportunist politicians through money, muscle power and use of ED in particular. It appeared as if this party is invincible. Backed by lakhs of swayasevaks and pracharaks (RSS trainees-workers), from Panna Pramukh (In charge one page of electoral roll) to heightened religiosity, it at one point came to a junction that its leader Mr. Amit Shah claimed that they will rule for fifty years.

Congress the other major National party, was reduced to a emaciated machine, where many of its leaders, not deep set in secularism and values of Indian Constitution started leaving it. They thought that their political prospects will be better in other parties, particularly BJP which offered them generous fodder. As the Yatra is marching Congress and Rahul Gandhi’s image is changing for the better. Rahul Gandhi who is going through the tough ‘trial by fire’ is emerging as an accomplished, upright, sensitive leader committed to what was the vision of India by the freedom fighters.

The Congress party which was going through ideological and organizational decline seems to have got a new lease of life and vibrancy. It now seems to have all the potential to take up the newer situation. Question is; can it take challenges head on to restore its place in the National life. It had a unique place which was unparalleled not only during the freedom movement but also after the freedom, when the first Prime minster of India, Jawaharlal Nehru laid the foundation of Modern Indian state based on secularism and ensured the spread of democratic values far and wide. Contrary to the predictions of our colonial masters, those giants who came to power after Independence ensured that India thrives as a democracy and strove to reach the benefits of freedom to all the citizens.

It was Mahatma Gandhi who had involved the vast mass of peasantry and other sections of society in the freedom struggle. He was also successful in mobilizing the latent democratic aspirations of women in a big way.

All in all the phenomenon of democratization and inclusive politics was struggling to march from formal to substantive equality. But there were many internal flaws and external forces, which started impacting on the national polity. Internally the Grand old party’s ideological training wing left a lot to be desired. Many entrants to the party did so for sake merely of power. Though Nehru had warned that many communal elements have entered into party, probably not much was done to stop that organizationally.

The absence of land reforms and persistence of pre modern ideology was well exploited by Religious right wing. This Hindu nationalists, had prepared the ground not only ideologically enhancing the conservative, orthodox and retrograde views, they also banked on the religiosity of the society to bring forth the identity issues like Ram Temple and Cow for example. The solid strength of RSS is the large and committed workers, fully indoctrinated in the view of history and ideology which not only sees democracy, secularism as Western concepts but also glorifies the past where values of Manusmriti ruled. They floated multiple organizations and ensured a place in most of the wings of state. This has created a situation, which is antithetical to the interests of average sections of society.

Congress as a major national party needs two pronged approach to take up the challenges faced by democracy, pluralism and march to equality in the arena of economic policies. Apart from internal democracy, the beginning of which has been heralded by the election of Congress President, the ideological rooting of its workers in understanding of Gandhi-Nehru version of Indian history and the inclusive ideology of freedom movement is paramount.

The need to look into ‘organizational-ideological’ backbone of the party will be crucial in times to come. The Yatra is doing a miraculous job where the leadership of the party can understand the needs of the country’s average people and not just the Corporate, who have the access to centers of power all the time. The present yatra also reminds one of extensive ‘third class compartment’ travels of Mahatma Gandhi which helped him grasp the pulse of the Country. Will this Yatra fulfill such a mission in current times is a million rupee question.

The need for real inclusion of minorities/caste/class gender in the yatra is of great importance. Away from the trolls and those who have totally imbibed Hindu nationalism, the large sections of society do look forward to inclusive society with Equality. There seem to be many on the ground who feel left out in the organization of the yatra; their representation is the need of the hour. The promise of Yatra is immense and challenges for restoring India on the path of Liberty, Equality and Fraternity still bigger!

The sacrifices of Muslim Ulamas for freedom of the country...