What should Guide Us: Indian Constitution or Manusmriti 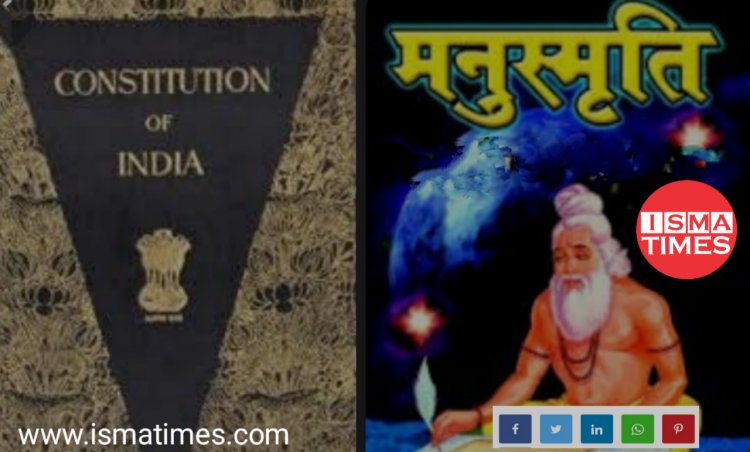 Judge Pratibha Singh as per Bar and Bench is reported to have said that “I really think we are a blessed lot of women in India and the reason for that is our scriptures have always given a very respectable position for women and as Manusmriti itself says that if you don’t respect and honor women, all the pooja path that you may do has no meaning. So I think our ancestors and Vedic scriptures knew very well how to respect women,”

It is true that Manusmriti does say “yatr naryasto pojyantay, ramantay tatr devta [3/56] (where women are provided place of honor, gods are pleased and reside there in that household). But that does not reflect the position of women in society given by this holy book. This Holy Scripture is also called Manav Dharma Shastra and is upheld by the ideologues of Hindu nationalism, from Savarkar to Golwalkar. Sadly its provisions are patriarchal to the core and give very low status the women. These quotes from the said book in a way sum up the social place of women, “Even in her own home, a female – whether she is a child, a young woman or an old lady – should never carry out any task independently. As a child, she must remain under her father’s control, as a young woman, under her husband’s; and when her husband is dead, under her sons,” it says in chapter 5, shlokas 148 and 149. And “Though he may be bereft of virtue, given to lust, and totally devoid of good qualities, a good woman should always worship her husband like a god,”

It’s not only caste-Varna hierarchy which this book proclaims. It is a total embodiment of the hierarchical values which Brahmanism upholds. There are claims that it is a revealed book and henceforth cannot be challenged. It was written between 170 BCE to 150 BCE. This is a period parallel to the attack on Buddhism/Buddhists by the Brahmanical King Pushyamitra Shung. (Dr. B.R. Ambedkar, Writings and Speeches Vol 3, page 270-271). This book traces Varna System to its divine origin.

As Buddhism, which articulated values of equality; was attacked and finished off in India these laws prevailed in the society, till long. It is only during colonial period, when the modern education was introduced and social reforms were conceptualized that Savitribai Phule started the schools for girls and that in a real sense is the beginning of social struggle for women’s equality. She had Fatima Sheikh as the teacher in her school. Savitribai Phule faced the attacks of conservatives, those upholding Manusmriti. She was opposed to the extent of being subjected to mud and cow dung being thrown on her as she used to go to the school. Later we see the likes of Pandita Ramabai and Anandi Gopal, defying social norms and taboos to come up in the society and contribute to process of gender equality.

Parallel to this was going on the struggle for social equality led by Jotirao Phule and later Bhimrao Ambedkar stood tall amongst those working for the values of equality, which became important for national movement led by Gandhi. At this stage Ambedkar, later to be Chairman of Drafting Committee of Indian Constitution, went on to burn Manusmsriti to protest against the values of inequality embodied in this scripture.

It is interesting that at this stage; the communal organizations (Muslim and Hindu both) were exclusively male organizations. Talking of currently the most powerful organization, RSS, it is an exclusively male organization. To involve women in its agenda it has Rashtra Sevika Samiti. The nomenclatures themselves reveal the deep set patriarchal values. While the male organization is Rashtriya Swayamsevak Sangh, the one for women is Rashtra Sevika Samiti. Here the word swayam is missing, matching with Manusmriti’s law that women have to be protected (Controlled) by men. Those linking their nationalism to other religions are also no different, Muslim Brotherhood (Egypt) and Taliban also being on these lines.

Indian Constitution reflects the values of Indian Freedom movement; where struggles for social justice ran parallel and were also part of the national movement. There is a long list of women who were part of National movement, Sarojini Naidu and Aruna Asaf Ali, Madam Bhikaji Kama, Usha Mehta being just few from the long list which broke the shackles of patriarchy and became the leading lights of struggle for Independence.

India has been in the grip of caste and gender hierarchy from centuries. Overcoming this is a real long struggle for which currently many women’s group are dedicatedly struggling against the atrocities against women due to secondary position being given to them.

Our learned judge while delivering justice needs to understand this grave contrast of our society. This contrast is starkly presented by the life of Ambedkar. He goes on to burn Manusmriti and later as a Chairman of the drafting committee of Indian Constitution plays a crucial role in upholding equality. Hope our law Universities, lawyers and judges register this point and internalize it to ensure that we walk the path of gender justice.