Hate speeches have multifarious intentions—sometimes, it is a direct call for physical harm or death threats to a particular community, which could lead to hate crimes; sometimes, it threatens people of their socio-economic boycott in society, and many a time, it intends to dehumanise and rip off the dignity of victims of hate speech. 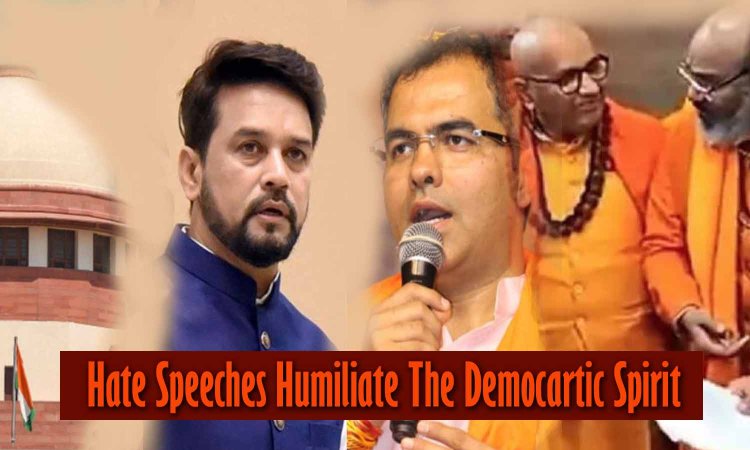 Democracy is defined by the participation and free will of the people it governs. Democratic states are ought to maintain the quintessence of democracy—equality, justice, liberty, and fraternity—that sets it apart from other forms of governance. The landscape of the world’s largest democracy, as decided by its framers, was set at the core of supremacy and freedom of choice of its ordinary people, empowering the people to have a voice in matters relating to their socio-economic, cultural and political well-being. The strength of India’s democracy has been compromised, following multiple incidents that violated the essence of democracy in the last few years, especially for the last eight years. The lack of accountability and the deafening silence showcased by the authority has further deepened the withering of democratic ethos.

The growing hatred, physical, social, and psychological violence, and the introduction of biased statutes targeting the minority communities of India have downgraded India’s status as a democratic country. Globally, this deterioration is highlighted, and various socio-political indicators/indices have criticised India for it. Terms like “partially free democracy”, “flawed democracy”, “democratic backsliding,” etc., have been used to expose the violation of constitutional rights happening in India. Among all, one of the most grievous threats is hate speech for the purpose of inciting people to commit physical, social, and psychological damage against the marginalised. The trend of hate speech in India peaked in the last couple of years, and ever since, it has become a routine in the Indian socio-political scenario. Hate speeches made by Hindutva supremacists, political leaders and representatives of the ruling party attract more traction and influence on right-wing followers because it gives these people credibility through the status quo and prominence of the leaders in our society. And therefore, we see a proportional relationship between the occurrences of hate speeches and reciprocal actions/attacks by bigots who entertain such spiteful ideology.

Hate speeches have multifarious intentions—sometimes, it is a direct call for physical harm or death threats to a particular community, which could lead to hate crimes; sometimes, it threatens people of their socio-economic boycott in society, and many a time, it intends to dehumanise and rip off the dignity of victims of hate speech. In a democracy, incidents of hate speeches are a disgrace to democratic values and a contradiction to the vision of our nation-builders. It limits the peaceful co-existence of communities, contradicts the idea of diversity and plurality, dishonours human dignity, questions the constitutional provision of religious freedom, and besmirches the delivery of the rule of law.

When we talk about the dwindling of the fundamental core of democracy, the responsibility does not entirely fall on the executive; rather, it is the balance of all three pillars of democracy—the executive, legislature, and judiciary—on which the strength of the constitution rests. Our constitution has divided the share of power and accountability among all the pillars judiciously; hence, we need to assess the functioning or the lack thereof of each pillar to have a holistic understanding of the matter.

In this case, the attack on the minority of India and the lack of accountability falls on each. Placing the responsibility on one not only gives leeway to the other two pillars but is also not constitutionally approved. We have had similar experiences in past where the misuse of power by political parties was observed. All of this can be handled when we have strong laws against hate crimes, hate speeches, etc., for the protection of weaker sections in general and minorities in particular in our society. Along with that, there is a need for a strong and independent judiciary.

The role of the court becomes imperative when we discuss the protection and preservation of constitutional principles. The judiciary is known as the guardian of the Indian constitution, which is responsible for upholding the rule of law and the sanctity of the constitution. Recently, the Supreme Court of India, in its interim order, directed police officers to take suo moto actions on matters related to hate speeches. We need more such proactive actions from the judiciary. The duty of the judiciary “to protect and preserve” the constitutional values for the peaceful co-existence of people belonging to different caste, religion, gender, class, etc., represents the true picture of secular and diverse India, as envisaged by the makers of the constitution of world’s largest democracy.

(The writer is Chairman, Institute of Objective Studies, New Delhi)

Include photos of Lakshmi and Ganesh on currency notes to bring India’s economy...

Solar and Lunar Eclipse as two important signs of Almighty...