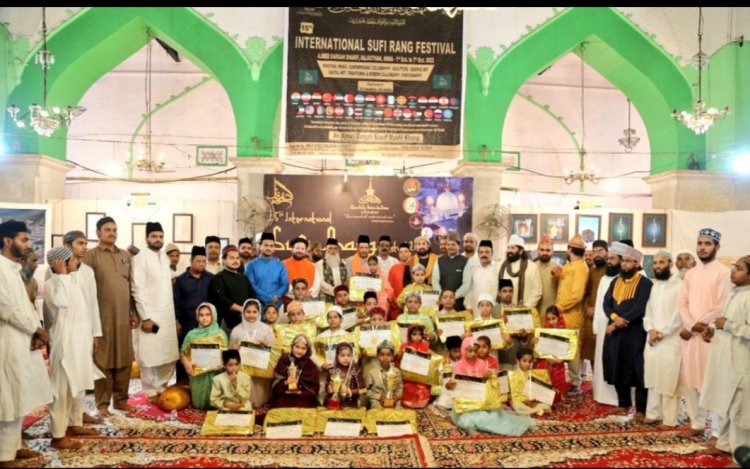 The 15th edition of International Sufi Rang Festival culminated into its 5th day with the ongoing exhibition of sacred Sufi arts and paintings in the Mehfil Khana of Ajmer Sharif Dargah.

On this occasion, school children from Khuddam e Khawaja Gharib Nawaz ra Sufi Community of the Ajmer District turned up at the Sufi Rang Festival in a large number. They felt elated to meet and greet the noted Sufi artists and calligraphers from around 40 states in India. Live workshops and interactive sessions on the Calligraphic Inscriptions, Sacred Arts and Spiritual Ethos were held, as usual, in the Mefil Khana from 2: 30 PM to 5: 00 PM. Common visitors at the Dargah of Ajmer Sharif also frequent the Calligraphy Workshop during the week-long exhibition of the International Sufi Rang Festival.

Significantly, the 5th day of this Sufi Rang Festival included the Qur’an Recital Competition among the children of the Khuddam e Khawaja Gharib Nawaz ra serving at Ajmer dargah Sharif holy shrine's  known as Khuddam-e-Khwaja Gharib Nawaz (R.A.). Around 55 children (both boys and girls) participated in this stimulating Qur’an Recital Competition with great fervor. Each participant recited one or two Surah (chapter) from the holy Qur’an with as much precision as possible. At the end of the program, all of them were awarded medals and certificates of participation presented by the Chishty Foundation. However,  the winners of this beautiful competition i.e. those who grabbed the first, second and third positions were selected after a great examination and scrutiny. Thus, they were given Chishty Shields of Excellence and Trophies for all winners as well besides the medals and certificates of participation to each participanting children.

Ambition is the path to success and Persistence is the...