“In extending one-time support to an initiative like the Bharat Jodo Yatra, we do not tie ourselves to a political party or a leader but simply affirm our readiness to set aside partisan considerations and stand with any meaningful and effective initiative to defend our constitutional republic.” - Yogendra Yadav 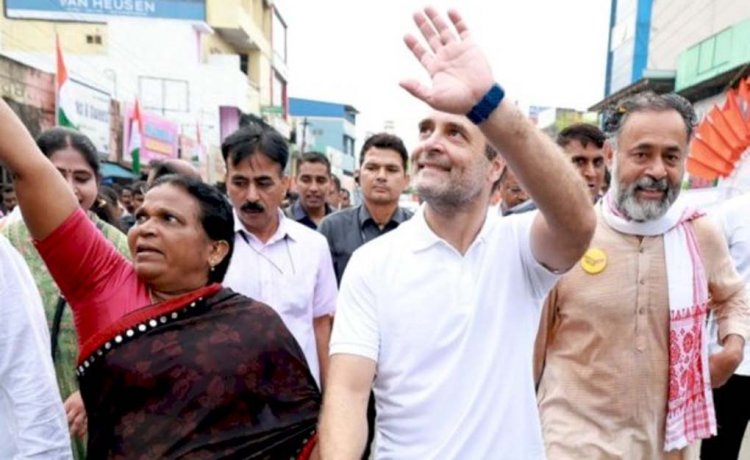 At this juncture in history, you don't hold on to grudges. Following Paul Samuelson, I ask everyone: 'When the situation changes, I change my assessment. What about you, sir?'

For the last three weeks, I have repeatedly faced these questions. Critics have had their share of fun. Media-persons assume that I would evade and wriggle out of this ‘hard’ question. While this is a fair question that demands a straightforward answer, it is hardly the fatal ‘checkmate move’ that they imagined. There is no volte-face here, no sudden change of heart, no U-turn.

The reason is simple: Most commentators do not care to read what I said and wrote then, and what I have said now. All they remember is “Congress must die” and all they see is the image of my walking with Rahul Gandhi on the Bharat Jodo Yatra. They assume they don’t need to say anything more: it is Q.E.D., as they say in mathematics.

So, the first step beyond these three words is to go over my 41-word tweet of 19 May 2019 in original: “The Congress must die. If it could not stop the BJP in this election to save the idea of India, this party has no positive role in Indian history. Today, it represents the single-biggest obstacle to creation of an alternative.”

Two days later, I elaborated the tweet in 1,123 words in an article for The Indian Express that spelt out the metaphor of death: “Alternative politics cannot take off … unless it begins to carry on its work as if the Congress did not exist. This is how the metaphor of death should be understood.” I explained that my position did not draw upon an unthinking habit of opposing the Congress: “Anti-Congressism was a short- term political tactic and must not be turned into an ideology”. Nor was it a personal attack on the Congress leadership: “Rahul Gandhi is more sincere than most political leaders that I have met and far more intelligent than everyone thinks.” Most commentators did not care to read these lines.

The core argument of my critique was straightforward: “The rise of the Narendra Modi-led BJP presents a threat to the core constitutional values of democracy and diversity… As the principal national Opposition party, the Congress carries the first charge of protecting the republic against this onslaught…Has the Congress done justice to this historical responsibility in the last five years? Or, can it be trusted to perform this responsibility in the foreseeable future? My answer is a clear no. The Congress is not just not up to this task, it is a hurdle for those who wish to do so.”

So, my charge against the Congress was based on a foundational expectation that it must take on the BJP juggernaut in order to save the idea of India. That is exactly the expectation that guides my support for the Bharat Jodo Yatra. The support is not unconditional. The statement that I have signed, along with over 200 activists and intellectuals, to support the Bharat Jodo Yatra underlines the unprecedented threat to constitutional values and the need to organise peaceful and democratic resistance. The statement says quite starkly: “In extending one-time support to an initiative like the Bharat Jodo Yatra, we do not tie ourselves to a political party or a leader but simply affirm our readiness to set aside partisan considerations and stand with any meaningful and effective initiative to defend our constitutional republic.”

So, the basic position has not changed. My starting point, then and now, is a search for politics that defends constitutional values in the face of the onslaught by the BJP and the Rashtriya Swayamsevak Sangh (RSS). I had looked to the Congress, then and now, as the first stop in this search since it happens to be the largest opposition party with a national footprint.

Something must have changed though. My rejection of the Congress then was based on a diagnosis and a prognosis. I had then judged the Congress to be a failure, actually an obstacle, in discharging its historic responsibility. So, what has changed since then? The Congress? Or me?

Have I changed my critique of the role of the Congress in the 2019 Lok Sabha election? No. There is no serious change in my reading of recent history. I have had no reason to change my opinion, my disappointment, and rage over how the election of 2019 was squandered. I blame everyone in the anti-BJP camp, including myself. But as the principal national opposition, the Congress must take the principal blame. Incidentally, I do not also regret participating in the anti-corruption movement and the decision to convert this into a political party. (I have written that I do regret our failure to allow a cabal to run away with that party.)

So, has the Congress changed in the last three years? Do I now trust what I identified as “Congress’ potential in acting as a bulwark against the onslaught on the foundations of our republic”?

An honest answer would have to be: “I don’t know”. Like many others, I am trying to discover an answer to this question. Not just from Congress leaders or other yatris. I am searching for an answer from among the people. I notice that the Congress leaders, especially Rahul Gandhi, have spoken in unequivocal terms on secularism, social

justice, and economic equality. I see that the Congress has invited other political parties, movements and organisations to join this yatra. I know the Congress leadership wants to take on the BJP, not just electorally but also politically and ideologically. But can it? That is the yakshaprashna for our times. It is a question for those in the Congress party. This is also a question for India. It is too early to offer a confident answer to this question.

What has changed in the last three years, above all, is India. In 2019, we were already in a bad place but nowhere close to the depth to which we have sunk in the meanwhile. Today, we stand at the edge of a cliff, where our Constitution, legacy of our freedom struggle, and our civilisational heritage are at stake. It is not just the government or democracy but the very survival of India — as we have known it — is under assault. At this juncture in history, you do not hold on to your grudges or quarrel, you must join every hand that is there to extinguish the fire. Following Paul Samuelson (not Keynes), I wish to ask everyone: “When the situation changes, I change my assessment. What about you, sir?”

What about prognosis? I had identified Congress as the principal hurdle for any attempt to create an alternative. This assessment assumed that the anti-BJP but non- Congress space could develop an alternative. This hope has not been borne out in the past three years. The fact is that all of us, who believe in alternative politics, have failed to forge a political vehicle that is both ethical and viable. Some of the regional parties have come up with robust ways of taking on the BJP. But they cannot offer an alternative national platform. Peoples’ movements, for all their energy and courage, do not offer us the necessary scale to take on the election machine of the BJP. For the next two years, the Congress and other mainstream parties are the only effective instruments to save our republic. I must record, in all fairness, that this is precisely what Professor Suhas Palshikar had argued in his critique of my position. As always, his reading has turned out to be more prescient.

One final word. Those who remember “Congress must die” tend to forget how I conclude that article. I speculate about the possibility of the “energy, inside and outside the Congress, to merge into a new alternative”.

“The dark metaphor of death is an invitation to think about a new birth. Or a rebirth?” Should we think of the Bharat Jodo Yatra as a possible moment of rebirth?