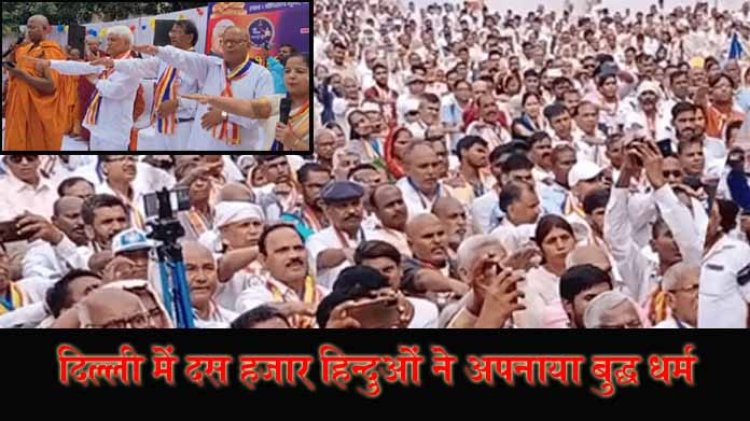 Rajendra Pal Gautam a minister in Delhi’s AAP Government, was forced to resign recently. He had attended a program in Delhi, on 5th October, Ashok Vijayadashmi day. The program was Buddha Dharma Deeksha Samaroha (Conversion to Buddhism), attended by nearly ten thousand dalits, who embraced Buddhism and abandoned Hinduism. On the lines of what B.R. Ambedkar did on the similar day in 1956, they took twenty two vows. These vows on one hand ask for giving up the worship of Hindu gods and goddesses (Bramha, Vishu Mahesh, and Gauri) and on the other ask for taking up the values of humanism, non discrimination, honesty, non-violence, speaking truth among others.

Following this a group of BJP workers assembled in front of his house; shouted slogans against him and hoisted saffron flag, with image of Lord Ram. Social media and section of Godi media went overboard that AAP party’s minster has insulted Hindu gods and goddess. Posters appeared in election bound Gujarat labeling Kejriwal as anti Hindu. Kejriwal quickly stated that he was born on Krishna Janmashtmi and is an ardent Hindu and showed his displeasure to Gautam taking those 22 vows.

Meanwhile some cases have been filed against Gautam by Delhi BJP President Adesh Gupta. It is in this backdrop that Gautam resigned. The vows administered at the program were exactly what Ambedkar had administered to his nearly three lakh followers. The vows also find a prominent place in his writings. It is true that they state not to worship the Hindu gods and goddesses, but in no way insult these deities.

As such RSS combine has a very complex strategy and Kejrival’s hollow iconization of Ambedkar becomes obvious from this. RSS at one level gives Ambedkar the title of Pratah Samraniya (To be remembered in the morning). This title is a highest honor to somebody. Even major leaders of RSS combine like Modi had said that he could come up in life due to the struggles undertaken by Ambedkar. Ambedkar’s birthday is celebrated with pomp and show by various wings of RSS.

The other side of the strategy is to implement its agenda of Hindu Rashtra, in multifarious ways. All this while totally going against what Babasaheb stood for. The very formation of RSS was in the backdrop of ‘Non Brahman’ movement in Nagpur area. This movement targeted against the rigid caste based hierarchies. Initially RSS articulated its agenda of Hindu Rashtra in a very blunt fashion, its eulogy for Golden (Brahmanical) past and particularly Manusmriti gave a reflection of what it stood for. Gradually it changed it strategies and language while retaining the core agenda.

Along with Hindu Mahasabha RSS was also a votary of Hindu Nation, in opposition to the Secular Democratic India. Its’ ideology was similar and opposite of Muslim League ideology which went to articulate for Muslim nation.

Babasaheb in contrast equated both these concepts of ‘religion based nationalism’ (Muslim and Hindu) being worthless and stood for social justice, secular state. In revised edition of his book on Pakistan, he opposed the demand for Pakistan on the ground that it may pave the way for Hindu Rashtra, which he foresaw as the big calamity for SC/STs. Constitution which he drafted was also criticized by RSS on the ground that it has been borrowed from Western concepts and ignored the glorious values given in Indian Holy books.

The caste issue has been very complex and its annihilation was the core concern for Ambedkar. The provision of reservations was mainly for the affirmative action to encourage the abolition of caste system over a period of time.  The opposition to this surfaced in the form of anti-Dalit violence in Gujarat in 1981 and then violence in 1986 against OBCs in promotion in jobs.

The biggest attempt by this organization was to strengthen Ram Temple issue in the light of Mandal Commission implementation. Atal Bihari Vajpayee very neatly described this phenomenon by saying that they brought Mandal (Commission) so we had to bring Kamandal (Ram Temple)!

Matters don’t rest here. RSS is a very dynamic organization and also is multifaceted. It can oppose Babasahebs’ twenty two vows while garlanding his portraits. It can undermine affirmative action for dalit OBCs by bringing reservations for Economically Weak Sections of society. Its stronger point today is to co-opt the dalit/OBC/Adivasi by various social engineering tools.

Its floating of organizations to work amongst these SC/ST communities has helped them win over sections of these communities, Samajik Samrasta Manch (For Dalits-OBCs), Vanvasi Kalyan Ashram (for Adivasis) in particular. It has been working among these sections of society to co-opt them in Hindu Rashtra agenda. At the same time it has picked the heroes of sub castes and iconized them. The best example of this is Suhel Dev from Pasi community. These earlier little known kings are glorified and given the anti Muslim slant.

The luring of some dalit leaders through power, like late Ramvilas Paswan and Ramdas Athawley for example has also helped it dig its electoral and ideological roots among SC-ST-OBC communities. To add to this, the starting of seva (service) work in these communities has enhanced this ideology and its politics to create a strong base among these communities, and this at the cost of affirmative action for them.

Today Gautam had to resign as the party to which he belongs does not have a spine in the matters of social justice. Its sole leader Kejrival was very active in Youth for Equality, which was meant to undermine the provisions of affirmative action for SC/STs-OBC. He has made Babasaheb as a major icon in the states being ruled by AAP, which is purely for electoral gains and not due to ideological commitment in any way, as reconfirmed by this incident.

What is remarkable in this whole campaign by RSS Combine on one side and the attitude of AAP is that it shows that these organizations can do away with Ambedkar ideology with ease. So, worship Ambedkar, put his portraits in Government offices on one hand while attacking the values for which he struggled all his life!

Ask Indians about socialists they will name Bernie Sanders | Won’t know about Lohia...

How to Revive the spirit of Quit India Movement?