Tiny glimmer of our two days with bharat jodo yatra 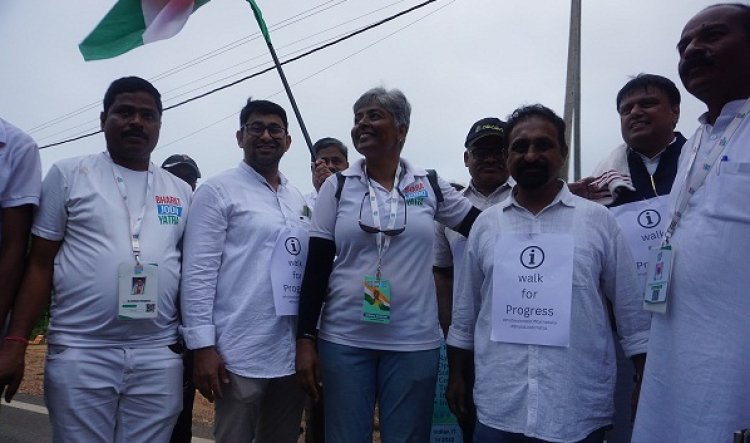 17 October, 2022 : One day on the Bharat Jodo Yatra, we found ourselves with a group of people we had met while we walked. This was in the afternoon break between the two sessions of brisk walking. We were sitting on chairs outside two enormous tents. One had dozens of cots on which the Yatra's yatris were resting. The other had long tables at which people sat to eat a simple lunch, served to them on bright green banana leaves.

Finished with lunch, our new friends were discussing why they had joined the Yatra. Mohan, a squat man with a greying beard, seemed to be working through his reasons right there and then, musing: "You know, I've been anti-Congress all my life! So why am I here at all?" He stopped to collect his thoughts. "But it's just that now there's this assault on Indian democracy," he said. Several people nodded. Nobody needed Mohan to spell out what he meant. He went on: "So I want to defeat that and save democracy." 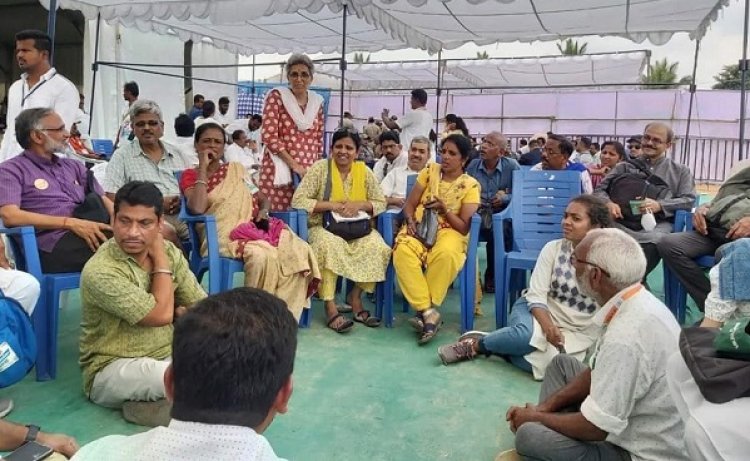 He seemed suddenly aware of the full weight of what he had just said. Then: "It's much better that we start getting organized a year-and-a-half before the elections, instead of only a month before." Several others nodded again.

Soon after, Mohan got up to leave. After two days with the Yatra, he and his friends were returning home that afternoon. It was only after he disappeared that I realised I had not actually said ‘bye. For I had been sitting there, lost in thought spurred by what he had said.

One face of the Yatra is the Congress. It's a party in some disarray and depression, you might say, because of its nosediving political fortunes over the last several years. It has lost elections, it has lost veteran Congresswallahs, it has factions sniping at each other. If this Yatra is a way to rebuild political capital, to galvanize Congress activists, to show the Indian voter that this party will not roll over and fade away - well, for anyone who values Indian democracy, that's welcome. 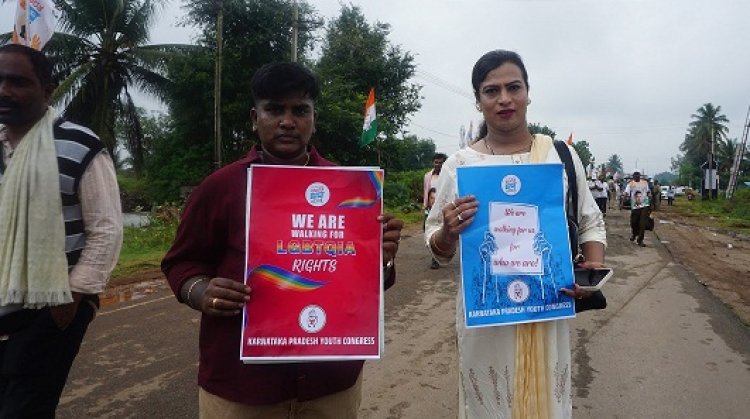 And why was I there? Partly because something like this gets my journalistic antennae quivering sharply. I wanted to simply watch and observe, in some sense not even really invested in the success or otherwise of the Yatra. Partly too, this was something I felt I had to do to stand up to the divisiveness, the hatreds, the polarisations that are marking out and deepening so many faultlines in this country. My solidarity with - luxuriating in, more like it - the diversity of India may mean very little in any broader sense. But it means a great deal to me, and that's what took me to the Yatra.

But I was also accompanying a small group of public health professionals. Two of them, Ramani and Ravi, are doctors trained in community health and have worked in primary health care for years in rural Orissa, Madhya Pradesh, Chhattisgarh, Rajasthan and Gujarat. Their friends and colleagues Guru and Prasanna are not doctors, but have worked with public health outreach organizations for years as well.

Working together over several days before we joined the Yatra, the four of them had prepared a brief on public health concerns - malnutrition, right to health care, and more. Their goal was to hand the brief over to the Congress leaders in the Yatra, including Rahul Gandhi. (They gave it to me to read and I had a couple of minor suggestions, which is why they added my name to the brief.) Through various contacts, there was actually a meeting scheduled - during the midday break on Monday October 10th - with Gandhi and others, where our group would present the brief. That was cancelled. Instead, the organisers arranged for us to walk with Gandhi for a while that morning.

Once we were positioned alongside him and walking, Prasanna and Ramani spoke to Gandhi about the brief. I should say straight up here that I'm terminally cynical about politicians, and especially at a moment like this when Gandhi was surrounded by surging crowds calling his name and wanting photos. It's a measure of my cynicism that I honestly did not expect him to really pay attention to us. But even while waving out every now and then and acknowledging the crowd, he listened closely to Prasanna and Ramani. He asked a series of questions, making them back up their data and conclusions.

One example: Ramani mentioned her experience with migrant workers in Rajasthan. They get injured at work and try to get the free care that is available in that state. But because their Aadhar card is from Bihar, say, they are denied treatment. Why should that be? But Gandhi asked, well, how will a state cope if floods of people from another state come in to take advantage of the announced free care?

After a while, I took the chance to speak about my book "The Deoliwallahs: The True Story of the 1962 Chinese-Indian Internment". I said to him that while I admired and respected his great-grandfather, this imprisonment of 3000 Chinese-Indians was one mistake he made. My co-author Joy Ma, I pointed out, was born in the camp and spent her first four years there. The Chinese-Indian community is longing for an acknowledgement of and apology for this injustice. Gandhi listened carefully, and asked me to send him a copy of the book.

Guru suggested he do an east-west Yatra too. Gandhi laughed and asked: "Will you join me then? All 3000 km?" Guru laughed in turn and said he would.

Just as we were moving off to the side to leave the cordon around Gandhi, he turned to Ravi and said: "Hey, I didn't hear from you. Is there something you want to tell me?" So Ravi spoke to him. He urged that if and when the Congress returns to power, it should pay attention to health care. In particular, it should ensure that health care is not completely privatised, because that will take it out of reach of the great majority of poor Indians.

Of course we were glad for our time with Rahul Gandhi. But that was just the icing, really.

(The author is a writer in Mumbai)

Letter to Chief Minister of Gujarat