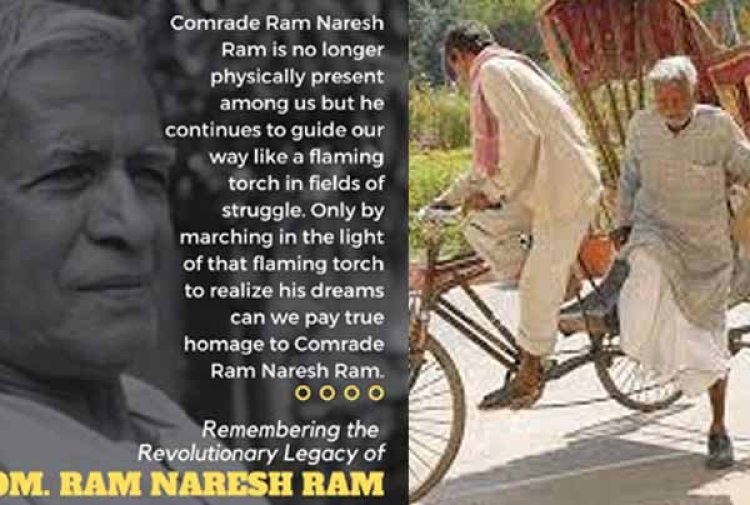 On this day, 26 October, in 2010, Comrade Ram Naresh Ram, fondly known as Parasji, passed away. Architect of the revolutionary movement of Dalit landless poor in Bihar, he was a CPIML Politburo member & leader of the party's legislative group in Bihar Assembly from 1995-2010. He was one of the founders of the revolutionary CPI (ML) current in the communist movement in Bihar.

Comrade Ram Naresh Ram was born in 1924, in Ekwari village in the Sahar block of Shahabad district (now called Bhojpur). As an 18-year-old he participated in the Quit India movement of 1942 and thus began his political career with the freedom struggle. Some years later he entered the communist movement and joined the peasant movement. The voice of the peasant insurgency of Telengana touched him and in 1948, he participated in a campaign to collect funds in support of that movement. In 1951 he became a member of the Communist Party of India and in 1952-54, he was one of the leaders of the CPI-led peasants’ struggle against hike in the canal irrigation rate by the Bihar Government.

At the time of the division of the Communist Party he joined the CPI(M) and in 1965 he contested for the post of mukhiya of Ekwari panchayat. This step was an open challenge to the feudal forces because till then, the feudal forces of Ekwari village had been electing their own candidates unopposed and on this pretext, they tried to stop Comrade Ram Naresh Ram from contesting elections. But he defied every scheme of the feudal forces and, on the strength of the unity of the poor and oppressed of Ekwari under the communist banner he gave a crushing defeat to the feudal candidate and opened a new chapter in the assertion of the oppressed. He was hailed as Ekwari’s ‘mukhiyaji’ ever since.

Soon after, the ‘spring thunder’ of Naxalbari could be heard in Bhojpur and Comrade Ram Naresh could see in it the future trajectory of anti-feudal struggles. He internalized Comrade Charu Mazumdar’s idea that people’s democratic revolution is the only way ahead, and peasant revolution is its essence. In the phase following Naxalbari, those comrades of Bhojpur who were disillusioned with the CPI(M) went straight to Kolkata to seek out and make contact with the CPI(ML). In 1970, Comrade Ram Naresh along with other comrades of Bhojpur joined the CPI(ML) and as an underground leader, he took responsibility for the peasant struggles led by the party. With this starts the glorious saga of the revolutionary struggles of the Bhojpur plains.

In underground life, Comrade Ram Naresh Ram was known as ‘Parasji.’ He had become a popular mass leader whose relations with the masses were as deep as that of fish with water. This was why, even while he was underground, he was successful in ensuring the participation of the masses in CPI(ML)’s revolutionary struggles, and in the decade of the 1970s, the armed struggle of Bhojpur’s peasants always had a mass character and the emphasis in these struggles remained on opening the doors for people’s initiatives and on mass actions. In 1974, after the reorganization of the party, it was Bhojpur’s experience that showed the party the way for the rectification campaign and even in underground circumstances it was in Bhojpur under Comrade Ram Naresh Ram’s supervision that the party’s special All India Conference was successfully held.

In the CPI(ML)’s Third Congress (1982) Comrade Ram Naresh Ram was elected a member of the party’s Central Committee, since when he remained a member of the Central Committee all his life. After the Congress he took up the post of the party’s Bihar State Secretary and in the 1980s he led the fresh upsurge of the peasant struggle in Bihar. Later he was given responsibility of Secretary of the special regional committee which functioned under direct leadership of the Central Committee. In 1990 Comrade Ram Naresh Ram took on the responsibility of the party’s open front and in the same year, addressed the massive ‘Dam Bandho Kam Do’ Rally organized by the Indian People’s Front (IPF) at Delhi as CPI(ML)’s representative. After this, he was elected National Vice President of the IPF and attended the CPI’s Vijaywada Congress as the fraternal representative of the CPI(ML)-IPF. Comrade Ram Naresh Ram was a Polit Bureau member of the party between 1989-1992 and 1995-2007.

In 1995 when CPI(ML) decided to participate in elections for the first time in the Party’s own name, Comrade Ram Naresh Ram led the election campaign, and filed nominations in the name of Parasnath in the Sahar Assembly constituency. This caused great consternation in the ruling class camp. The Government and administration put up many hurdles to his candidature and indulged in widespread slander. In the face of all this, he won the seat by a wide margin. Thus, after a relentless struggle of 28 years, he entered the Bihar Assembly and took up the post of the party’s legislative group – a responsibility he retained till the end.

Comrade Ram Naresh Ram’s victory caused deep demoralization among the feudal and communal forces. The Ranveer Sena (a private feudal militia) was born out of this demoralization and reaction, and then began the phase of barbaric massacres in dozens of poor hamlets like Bathani Tola, Bathe, Nagri, Shankarbigha, Narayanpur, Miyanpur, etc. In these massacres, the Ranveer Sena took the lives of hundreds of dalits and poor people, including a large number of unborn babies, children, women and old people. Under the perceptive political guidance of Comrade Ram Naresh Ram and the leadership of the CPI(ML), the poor people of Bhojpur and Bihar defeated this feudal ploy. Today the Ranveer Sena along with all other private armies no longer exist in Bihar.

His role as an MLA representative of the revolutionary opposition was unparalleled, and a model for all communist legislators. As an MLA, he always led the people’s struggles of his constituency from the front and always posed a challenge to the Government and administration. In particular, he waged powerful struggles inside and outside the Assembly on the question of political patronage to the Ranveer Sena and imposition of draconian laws (especially TADA) on the struggling poor. On the other hand, he himself gave direct leadership to the process of establishing people’s supervision and regulation over the development undertaken by government machinery and in reining in the corruption by government officials and contractors. As a result he became such a popular MLA from his constituency that all his opponents considered him invincible.

From the first war of independence of 1857 through the 1942 Quit India struggle, and beyond, Comrade Ram Naresh Ram was a torch-bearer of the revolutionary anti-imperialist anti-feudal legacy of the entire freedom struggle. It was this legacy that he carried forward by leading the revolutionary communist movement. In his constituency he had a memorial to 1942 martyrs constructed at Lasarhi – something which no previous MLA of this constituency had undertaken in 50 years of India’s independence. Every year a ‘Shaheed Mela’ would be organized at this memorial and this year too Comrade Ram Naresh Ram actively participated in this event.

During the freedom struggle Swami Sahajanand Saraswati had played a vanguard role in lighting the spark of anti-feudal and anti-colonial struggles among India’s peasants; in the period of India’s ‘second Independence struggle,’ Comrade Ram Naresh Ram under the leadership of the Communist Party played the same role – lighting the revolutionary spark of political assertion in the most oppressed sections of society from the initial phase till the revolutionary anti-feudal struggles of the Bihar plains. As a result of these struggles, the dalit-backward rural poor of independent India achieved their basic democratic right – the right to vote – for the first time and not only sent their representatives to the Parliament and Assembly but also changed the balance of forces in local self-governance bodies. Comrade Ram Naresh raised the issue of land reform in Bihar with such commitment that he can be called the Swami Sahajanand of independent India. At the founding Conference of the All India Agricultural Labourers’ Association (AIALA) at Ara in 2003, he was elected the National President of the organization and till the end, he remained the Honorary President of AIALA.

Comrade Ram Naresh Ram’s personality was steel tempered in the fire of revolutionary struggles. He was a peerless leader from among the dalit-oppressed people, speaking their own language. On the one hand he was known for his simplicity, his friendly and simple nature and his humility and on the other for his firm principles and his dauntless commitment. He was a unique icon of struggle and simplicity. He grasped a range of immensely varied responsibilities given to him by party and successfully undertook them with great commitment. His entire struggling life will be a lighthouse of inspiration not only for the present but for the coming generations.

Include photos of Lakshmi and Ganesh on currency notes to bring India’s economy...