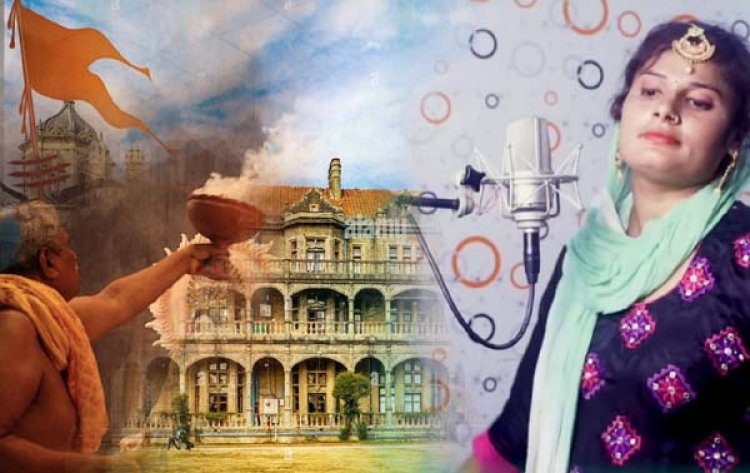 India’s cultural and religious richness lies in its diversity. Many poets and writers have given a beautiful picture of different caravans coming here, interacting and creating lovely bouquet and salad bawl of our cultural interactions. The peak of this was during freedom movement when people from diverse communities thickly interacted to get rid of colonial yoke. As the process of thick interaction was deepening, at the same time some opposing sectarian processes also developed and they tried to retard this process, which peaked in the partition of the country.

With freedom we saw the interaction and syncretism being the main process while divisive tendencies were weak and marginal. During last four decades these sectarian tendencies are raising their ugly head and opposing the ‘Indian Diversity’ very strongly. Last couple of weeks we saw this in a very disturbing way.

One Maulana of a minor madarassa in Deoband passed a fatwa against Farzani Naaz, a Muslim singer whose Bhajan (Hindu devotional song) ‘Har Har Shambho’ became a hit. This Maulana is a favorite of the TV channels who in their Prime time ‘cock fights’, mistakenly called debates, pitch the extreme elements from both religions and reap the rich harvest of TRP. Incidentally this Maulana has nothing to do with Darul Ulum Deoband, the main madrassa, which gives fatwa when someone asks for it. Fatwa’s as such means opinion.

This retrograde Maulana Asad Kasmi is totally ignorant of the great tradition of Hindu bhajan singers starting from Mohammad Rafi to Faraz Khan, whose songs are sort of immortal contribution to Hindu devotions songs. Many of these are composed by outstanding music directors like Naushad Ali to A. R. Rahman. The list can fill pages but am tempted to cite just two of them. My biggest favorite being Man ‘Tarpat Hari Darshan ko Aaj’ (Sung by Rafi, composed by Naushad Ali and written by Shakil Badayuni). Who can forget the bhajan ‘Hari Om Tatsat’, sung by none other than Bade Ghulam Ali Khan. It is not a one way traffic; there are many remarkable Hindu singers who have contributed to singing of qwwali, Prabha Bharati and Dhruv Sangari being the foremost among them.

One recalls a few years ago, a Bengali film actor and MP, Nusrat Jahan was hauled by these clerics for participating in Durga Puja, something which is part of Bengali culture. Across the border a Muslim college teacher was harassed by a police for wearing Bindi, saying it is a Hindu practice. It is good that the cop was suspended.

Systematically rumors are spread as to how Masjids store weaponry, used in communal violence. There are also horrid rumors that Hindus can’t enter Masjid. The contrary is true that many Hindu temples don’t permit people of other faith. As far as Masjids are concerned there is no such prohibition. In a society like ours, where the segregations have increased; some schools have started field trips for their students to different places of worship. Now while some of these go on well there seems to be a rising opposition to such events from the likes of Bajrang Dal etc.

Delhi Public School in Vadodara, as a part of exposing children to diverse places of worship, planned to take the children to a trip to a mosque. Bajrang dal warned of dire consequences and the trip had to be called off. Earlier week these children were taken to a temple. Similar incidents are reported from Delhi, Karnataka among others.

These attacks on our syncretism are becoming more in intensity as the polarization politics is becoming the order of the day and is growing in intensity. One of the shocking examples of this polarizing politics was witnessed recently when Indian National Congress decided to organize a protest in parliament house to march to Rashtrapati Niwas against rising prices; GST and other pressing issues faced by the average citizens of the country. They were wearing black clothes as a symbol of protest.

As the country is writhing under the flogging of rising prices, growing unemployment, worsening health and educational facilities, not many protests have been staged. The regional parties and left parties in particular have not been drawing the attention of the country to these issues, which was the earlier norm.

BJP true to its character used this protest to deepen its polarizing agenda. Mr. Amit Shah, the top leader of BJP and also Home minster in the wake of the protest march, stated that Congress is trying to oppose the Ram Temple, Ayodha day. Congress did it on 5th August when the PM had inaugurated the construction of Ram Temple. He called the Congress protests as part of appeasement politics. He was joined by UP Chief Minister Yogi Adityanath who asked Congress to apologize to the nation for “insulting” Ram devotees by staging protests in black clothes on the day when the construction of the Ram temple began in Ayodhya two years back”.

Congress hit back by stating that Shah-Yogi’s is an attempt to divert, distract and polarize the society. BJP’s is a malicious twist to the democratic protest- demonstrations against the rising prices. Protests against the current worsening plight are the need of the hour. BJP, by linking protests to Ram Temple appeasement, is playing the game which it has mastered over decades. Convert everything to Religion, emotive issues and deepen the communal divide, which is increasing in the country. Can the other opposition parties and social movements take on the sectarian twists of BJP?  Can the democratic and secular elements, groups and parties swallow such a gross distraction from people’s problems of day to day life?

BJP, supported by its vast collaborating organizations and compliant media in tow is pursuing its agenda where people’s problems have no place. What matters is rousing the emotive pitch around the religious issues to pursue its deeper agenda.

The attack on syncretism from multiple directions and the communal distraction in the face of the worsening plight of people should worry us all. The democratic narrative where people’s problems should be at the forefront needs to be boosted with full energy.