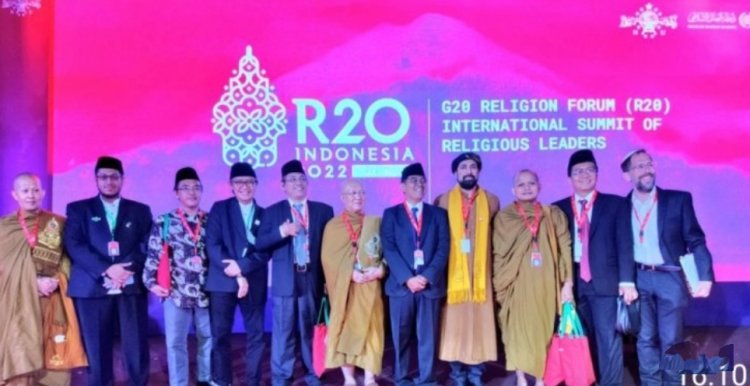 The First R20 Summit which has been introduced under Indonesia's G20 Summit Presidency and a permanent secretariat of G20 Religion Forum R20 have been established in Jakarta by Indonesia largest Islamic Spiritual and Educational Organization - The Nahdtal Ulema with over 100 million active members and followers in Indonesia.

Haji Syed Salman Chishty - Gaddi Nashin - Dargah Ajmer Sharif, Chairman of Chishty Foundation and General Secretary of AIUMB - the largest organization of Ulema and Ma'shaikh in India, represented Ajmer Sharif, India at the forum on the personal invitation of The Chairman of the Central Board of Nahdlatul Ulama (PBNU) KH Yahya Cholil Staquf (Gus Yahya) to share the views during the first ever Religion Forum R20 Summit as part of G20 Global Summit Presidency of Indonesia.

Haji Syed Salman Chishty stressed the importance of Inter Religious dialogue as well as Intra Religious talks to find global solutions of problems, extremism, radicalization and violence in the name of Faith and Religion when the essence of Faith and Religious practices are Mercy, Unconditional Love, Compassion, Serving All with Care and Gratitude. In his remarks, Haji Chishty congratulated the visionary leadership of Indonesia' President H.E. Joko Widodo and examplary guidence of Nahdtal Ulema Spiritual leadership headed by current General Chairman KH Yahya Cholil Staquf (Gus Yahya) for maneuvering the largest Muslim populated nation in the world as an example for global communities and nations to learn from the great celebration of Unity in Diversity, educating the youths and citizens to be respectful towards each other and treading the moderate progressive path in matters of state and religion. 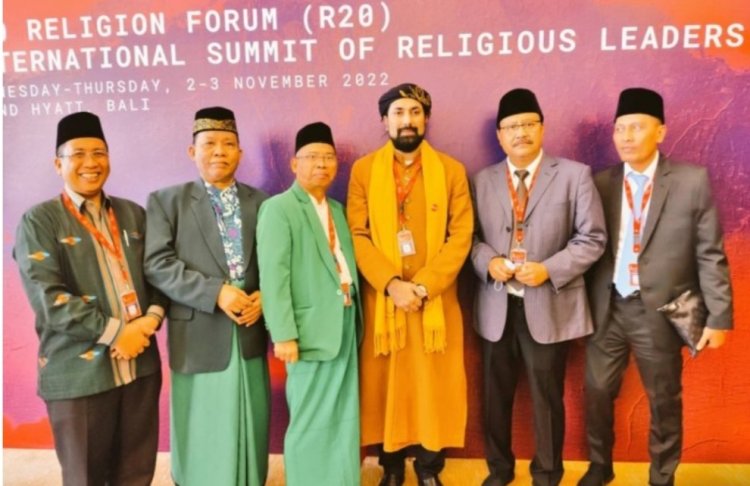 The Chairman of the Central Board of Nahdlatul Ulama (PBNU) KH Yahya Cholil Staquf (Gus Yahya) received two awards at once at the Religion of Twenty (R20) Forum International Summit of Religious Leaders 2022.

Gus Yahya received the "Global Peace Award" from Haji Syed Salman Chishty in commemoration of the 15th International Sufi Rang Festival. After the handover of the award certificate, Gus Yahya was then wrapped in a green shawl, directly by Haji Syed Salman Chishty - Gaddi Nashin - Dargah Ajmer Sharif, Chairman of Chishty Foundation and General Secretary of AIUMB - the largest organization of Ulema and Ma'shaikh in India.

On that occasion, Gus Yahya also received an award from the Cambodian representative. The award was given as a form of appreciation for the initiative of Nahdlatul Ulama commanded by Gus Yahya as the party who initiated the implementation of the G20 Forum Religion (R20).

As is known, the R20 forum raised the theme ‘Revealing and Nurturing Religion as a Source of Global Solutions: A Global Movement for Shared Moral and Spiritual Values’. R20 is a space for religious and world sect leaders to build dialogue and present ideas related to contribution of religion to create solutions to the global problems.

The total number of confirmed countries present at the R20 event was 32 countries. A total of 338 participants were confirmed to attend, 124 were from abroad. The forum featured 45 speakers from five continents.

This activity was marked by the handover of the R20 Forum banner and plaque to Sri Ram Madhav Varanasi. The two were accompanied by a number of figures, such as the Chairman of the Muslim World League (MWL) for Southeast Asia and Australia Sheikh Abdurrahman Al-Khayyat, Indonesian government representative Muhsin Syihab, and a number of religious figures from India including Shri Govinda Dev Giri ji, Swami Mitrananda ji, Swami Bhadresdas ji  at the R20 Summit part of G20 Forum with Indonesia Presidency.

Earlier, Sri Ram Madhav extended his welcome to his country, India, in the coming year as the holder of the G20 presidency. “Welcome to a country that believes everything is holy, every part is holy. All images, all contents are divine,” he said.

“The country (India) not only tolerates, not just respects, but celebrates the diversity of humanity. We are an Indian society that values diversity,” he concluded.