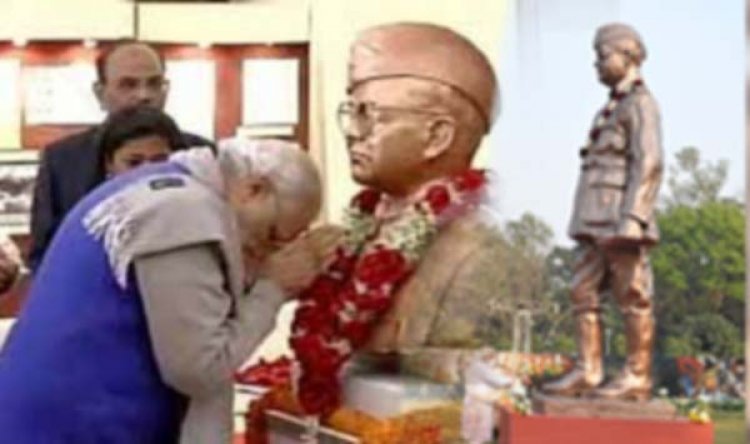 While inaugurating the statue of Netaji Subhash Bose on September 8 in New Delhi, Prime Minister Narendra Modi stated that had India embarked path shown by him, India would have progressed much better, that he has been forgotten, and now (with Modi's rule) his vision is being brought back. Modi claims his governance is showing the imprint of Netaji’s policies.

To begin with what was Netaji’s vision of economic growth? He was a socialist who believed in planning as the bulwark of the nation’s prosperity. After he became the president of the Indian National Congress in 1938, one of the major steps he took was to bring forth the importance of economic policies. He wrote to Jawaharlal Nehru, offering him and urging him to accept to head the proposed National Planning Committee, “Hope you will accept the chairmanship of the National Committee. You must if it is to be a success.” Nehru in turn not only accepted the offer of his close ideological friend but carried it forward in independent India.

Along these lines, Nehru set up the Planning Commission which steered the economic development of the country. It is only in 2014 with Modi came to power that this Commission was scrapped and replaced by Niti Ayog with a different set of goals. As far as economic planning was concerned it was Nehru who took forward Bose’s vision while Modi has reversed the same. Bose-Nehru saw the role of public sector institutions in the shaping of our economic prosperity, which is currently being undone.

There were differences between Bose and the major leadership of Congress on the issue related to the anti-British struggle. Bose wanted to seek an alliance of Germany-Japan, going by the dictum, ‘Enemy’s enemy is a friend', while the majority of Congress leadership under Gandhi wanted to launch an anti–British agitation. In a way his seeking Japanese support was disastrous. Had Germany-Japan won the Second World War, India’s slavery to Japan would have been inevitable.

As far as India’s rich syncretic heritage is concerned, Gandhi as the greatest Hindu saw all the religions as Indian religions and drew from their moral values. Nehru in his own way upheld Ganga-Jamuni Tehjeeb (syncretic culture) and made this the central understanding in his magnum opus ‘Discovery of India’, which turned into a must-watch Shyam Benegal’s ‘Bharat Ek Khoj’.

Bose was also a strong proponent of pluralism in Indian culture. Bose in his “Free India and Her Problems” writes, “With the advent of the Mohammedans, a new synthesis was gradually worked out. Though they did not accept the religion of the Hindus, they made India their home and shared in the common social life of the people – their joys and their sorrows. Through mutual co-operation, new art and a new culture were (sic) evolved ….” And also that, “Indian Mohammedans have continued to work for national freedom.” In order to uphold the rights of minorities, he conceptualized a new State where “religious and cultural freedom for individuals and groups” should be guaranteed and no “state religion” would be adopted.

While the ruling Hindutva ideology sees Islam and Christianity as "foreign religions" and developed this ideology into misconceptions and hate against Muslims and Christians, the understanding of Gandhi, Nehru, Bose and most leaders of the freedom movement revolved around seeing the diverse religions as a point of welcome and strength to the nation.

Bose’s actions were testimony of the same. While naming his army, he used the Urdu word "Azad Hind Fauz" rather than any Sanskritized word. So much similar to what Gandhi thought. If one goes through the who’s who of Azad Hind Fauz, one will not only see the Rani Jhansi regiment with Laxmi Sehgal as its head, there were Shanwaz Khan, Sehgal and Dhillon coming from different religions. It was conscious planning on the part of the diehard, deeply secular Bose who fashioned his army along these lines.

Nehru's regard for Netaji

The government in exile that he formed was also named similarly Arzi Hukumat Azad-e-Hind. Mohammad Zaman Kiani and Shaukat Ali were his close confidantes. Col. Cyril Stracy was another such confidante.

This was the rooting of fraternity which is being totally undone. Wounds are being inflicted on our bonding across religions, where anti-minority actions and statements are to the fore and religious minorities, not only Muslims but even Christians, are being relegated to second-class citizenship.

Despite his differences with Indian National Congress on the path to be pursued, he remained very respectful of the Quit India movement and called upon Veer Savarkar and Mohammed Ali Jinnah to participate in the movement. It is another matter that today's ruling elites' ideological mentors Savarkar and Golwalkar not only opposed the Quit India movement but also bowed to the British and helped them in their war efforts.

We are living in strange times. Those in seats of power are trying to gain legitimacy and credibility from those whose ideas and principles they have been totally opposing through their deeds in the current time. The incidental projection that Nehru did nothing to keep alive the memory of Bose is false to the core. Nehru not only adorned the lawyer’s coat to fight the cases of war prisoners of Netaji's Indian National Army (INA) but his offering regular support to Bose’s daughter who lived abroad should also be remembered as a token of the esteem which Nehru had for his great friend and comrade, Netaji Subhash Chandra Bose.

Solar and Lunar Eclipse as two important signs of Almighty...