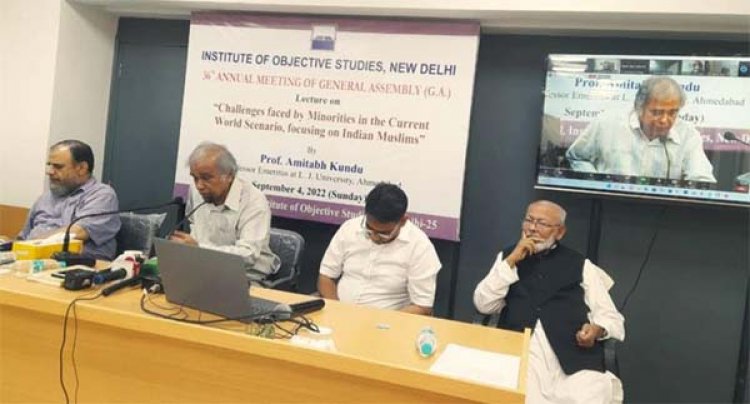 New Delhi : An online/offline lecture on “Challenges faced by Minorities in the Current World Scenario, focusing on Indian Muslims” was organised by the Institute of Objective Studies on September 4, 2022, on the occasion of the Institute’s 36th Annual General Assembly meeting. The lecture was delivered by Prof. Amitabh Kundu, the professor emeritus, LJ University, Ahmedabad, and a distinguished fellow at the Research and Information System for Developing Countries.

Introducing the topic, Prof. (Ms.) Haseena Hashia, Assistant Secretary General, IOS, said that Prof. Kundu was not a new name to economists, sociologists and policy planners. He was remembered for his contribution as the chairman of the post-Sachar evaluation committee. She held that the topic was very important from the prism of the status of Muslims in economic and social fields. 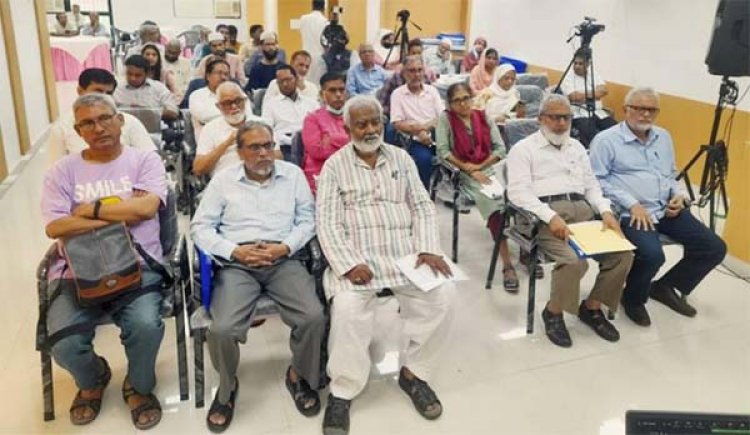 Prof. M. Afzal Wani, Vice-chairman, IOS, and Pro-Vice-chancellor, IILM University, Noida, in his brief speech, said that he had favour, blessings and honour whenever he approached Prof. Kundu. He believed that everybody was a minority sometime, which was not necessarily connected with faith only. Rather, anybody connected for any identity with the minority stood at any moment of time.  Probably, what humanity needed today was to get sensitised to it. He said that the topic was very much important for the whole of the world. He said that Prof. Kundu is a good fit to talk on the subject matter, given his area of expertise and caliber. He would do the best while dealing with issue of what was happening about the minorities in the world. Nobody was carrying such kind of heart and sensitized mind and a skillful person with modern systems of analysis in social science as Prof. Kundu, he remarked.

Delivering the lecture, Prof. Kundu said that he would focus on social and economic conditions globally and the condition of minorities in India with a little more attention on Muslims. He clarified that he was not working for the Muslim community but worked for inequality and social justice. Referring to India’s growth recovery, he said that it was faster and was doing better. The 21st century belonged to India, and its faster economic growth was poised to leave even China behind. But, there are some structural issues. Inequality and regional disparity were major areas of concern. Deprivation of the Muslim community was one of them. He pointed out that India was now struggling and getting out of two and a half years of the nightmare of Covid-19.

Every developing country was talking about the reshaped economic recovery. He said that in the case of India, regional, social and economic disparity were the major areas of concern. The deprivation of the Muslim population was also a matter of concern, he said.

Prof. Kundu maintained that the unequal access of people to the labour market caused disparity among various social groups. He said that even before Covid-19, the Indian economy was not very well. At present, share of India in the global economy was only 8 percent out of 18 percent of the total population share of the world. It was expected that India’s share would be 29 percent by 2050. Then, it would be much larger economy than China. This projection had been endorsed by the Asian Development Bank (ADB) and World Bank. He struck a note of optimism by saying that the 21st century belonged to India. He said that Asia’s share in the global income was 58 percent as against 12 percent in 1961. As per Bloomberg Foundation analysis, the projection was that Asia’s share would again reach 50 per cent, which would mean a big recovery. Indian recovery was also much sharp. He said that the projection for India’s economic growth was very positive.

Prof. Kundu said that Indian economy was poised to reach 10 trillion dollars by 2032. Referring to the skill development, he noted that it was unequal in respect of both Muslims as well as Scheduled Castes/Scheduled Tribes. Not everybody had an equal share in the labour market; if certain critical assumptions were not made available to different social groups, then, certainly the dream projection of a most powerful nation would be difficult to achieve. In order to achieve this in the labour market, access had to be given to all irrespective of caste, class, gender and religion. Similarly, in skill development, if inequality among various social groups was not minimized, then projected growth would not be accomplished, he said.

Prof. Kundu observed that India was certainly looking up. It would overtake China in terms of its share in the GDP. But still, there were some catches and assumptions. Putting up a mathematical model, the Asian Development Bank, Manila, said that 21st century belonged to Asia – to India. According to Angus Madison, an economic historian, Asia’s share in economy was 58 percent in 1700, and it continuously slid downward. He said that Indian recovery was much sharper as it was doing much better. If India was able to maintain growth tempo with its structural parameters being very much strong, it would certainly come up. He noted that in the last 7-8 years or a little earlier to this, the Human Development Index (HDI) had been growing well as it was growing two decades ago prior to this. The United Nations Development Programme (UNDP) brought out the report of HDI every year where India’s growth was seen negligible. Earlier, India’s growth used to increase 2 per cent. But now, it was less than 1 per cent.  He pointed out that India dropped to 132nd rank out of 191 countries in the 2021 HDI report. It was further declined during two years in a row – 2020 and 2021.

Explaining that there were three things that came under HDI, he said that they were education, health and average income. Inequality in the access to education and skill development was very high, and unless it was addressed, the whole dream of India becoming a 10 trillion economy would become a far-fetched goal. He also revealed that the rate of education among Muslims had increased. But the rate of education among women was very low. Even today, the drop-out rate of Muslim girls was very high. He reasoned that the high rate of drop-outs in education was due to their economic hardship. However, he said that in rural areas, the overall situation of Muslims improved, compared to Dalits and OBCs because of the latter’s dependence on agricultural wages. The death of children up to the age of 5 years was also less among Muslims, he concluded.

In his presidential remarks, Prof. M. Afzal Wani, observed that Prof. Kundu provoked a thought that intrigued one to think. There was dejection, depression and deprivation in our society. He said that when one was caught up in a difficult situation, he must try to wriggle himself out of it. One should rise and ensure justice to everybody. He advised to give respect to every human being. He exhorted the young Muslims not to get depressed and accept challenges.

The lecture ended with a vote of thanks extended by Prof. (Ms.) Haseena Hashia.

Communal virus injected into diaspora and the culture is growing

Farewell of His Excellency Pham Sanh Chau the Ambassador...

UN day of PeaceKeepers organized by Global Trade and Technology...